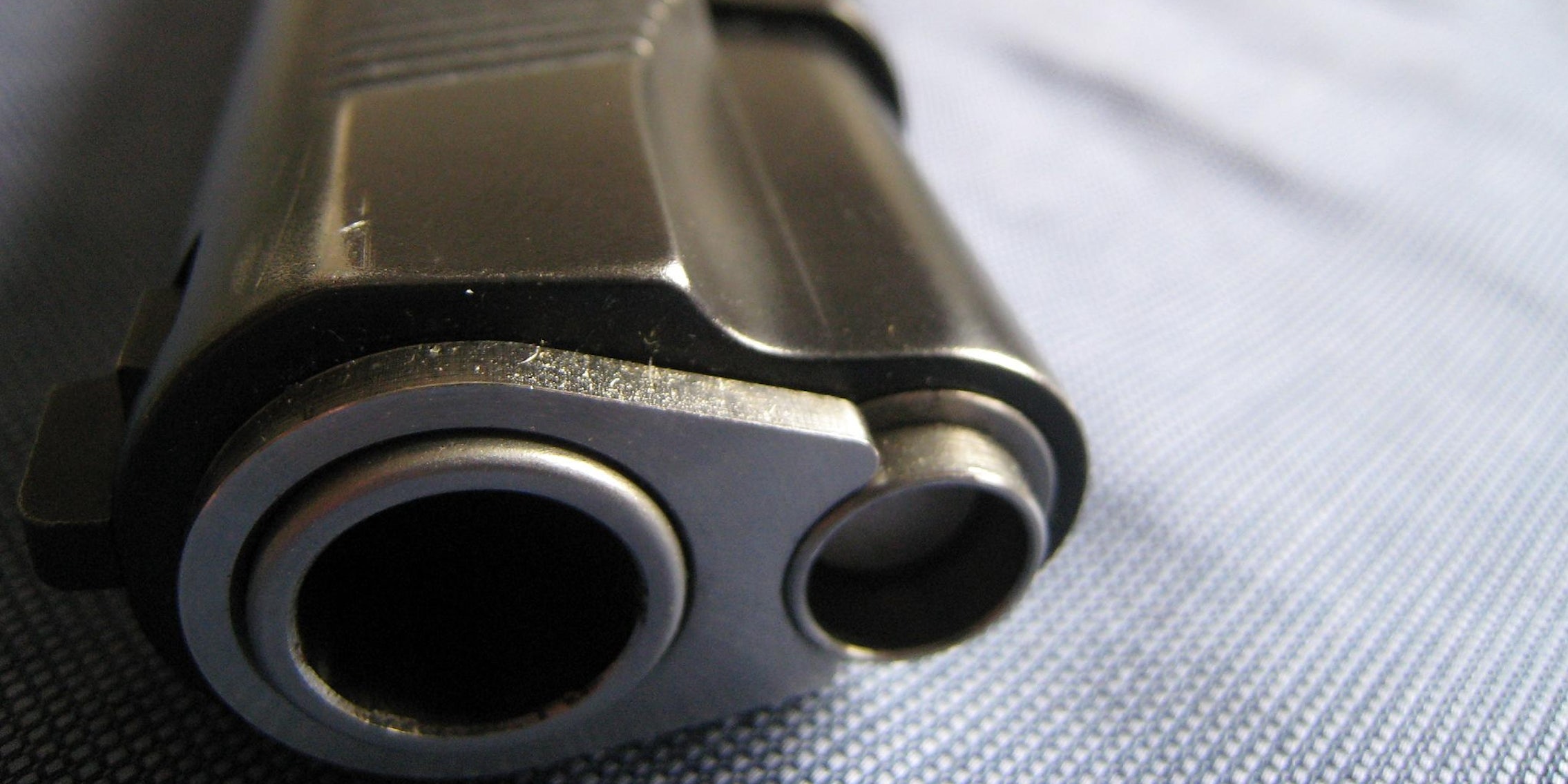 Photo via teknorat/Flickr (CC BY SA 2.0)

This photographer didn't flinch when a cop pointed a gun at his face.

An undercover law enforcement agent drew a handgun on a crowd of protesters on Wednesday night in Oakland, Calif.

San Francisco Chronicle photographer Michael Short managed to capture the scene, even while staring down the barrel of a gun. Other images of the incident were nabbed by Noah Berger of Reuters, who photographed the officer’s profile as he pointed the gun.

More than 100 supporters of the ever-growing national Black Lives Matter movement marched on Wednesday through the streets of Oakland and Berkeley. The incident involving the drawn weapon was live-tweeted by not only protesters and press, but the Oakland Police Department’s own Area 2 Commander Lt. Chris Bolton.

Report of an officer in need of assistance draws response near whole foods. Arrest made. #oaklandprotest

Here is an image of one of last nights undercovers pointing his gun directly at a person with a camera. #oakland pic.twitter.com/lVEsNEhFpu

Some who attended the demonstration say they witnessed the unidentified officers attempting to disrupt the peaceful protest and provoke violence. Specifically, they accuse the officers of banging on windows and calling for protesters to loot businesses while walking among the crowd.

One of the officers in Berger’s photographs can be seen wearing a black mask to obscure the lower half of his face. Activists claim the officers, whose agency has yet to be identified, were attempting to disguise themselves as anarchists. (See update below).

I've seen undercovers confronted lots of times, but usually leave march not pull gun. This guy was 6'8" and had 75+ cops 30 yards behind him

Answers have not been forthcoming as of yet, however, according to Bolton on Twitter: “The #OaklandProtest pictured man isn’t an OPD officer & not an OPD arrest. OPD 1st responded to scene on report from other agency.”

He added: “That outside agency has been notified to provide details and address concerns re #OaklandProtest…”

I don't know the circumstances other than the report & arrest. We can & should coordinate answers to concerns & questions

Oakland has a long history of activism and civil disobedience. “Chemical agents”—law enforcement’s term for tear gas—were repeatedly deployed outside its city hall by riot police at the height of the Occupy protests in 2011. Earlier this year, the city was forced to settle a federal lawsuit to the tune of $4.5 million after police fired a less-than-lethal round at the head of a 26-year-old Iraqi War veteran, which resulted in permanent brain damage.

Update 1pm ET, Dec. 11: The two officers in the aforementioned photographs were identified on Twitter by Lt. Chris Bolton of the Oakland Police Department as California Highway Patrol on Thursday morning.

Update 8pm ET, Dec. 11: Chief Avery Browne, Division Commander of the California Highway Patrol, Golden Gate Division, denied allegations that his officers were involved in inciting demonstrators in any way. The two plain clothes officers were deployed by the CHP to “protect the state freeway system and protect state assets,” he said. CHP added that they rely on intelligence such as social media, informants from various agencies, and plain clothes officers within demonstrations to gather intelligence, which they claim revealed “guns, bricks, stones, concrete, m80s, and other projectiles” within the crowd. No firearms were seen in the crowd Wednesday night, and no one was arrested for carrying one.

From inside an unmarked vehicle with the windows rolled down, the two officers reportedly heard plans to vandalize an ATM and a T-Mobile store. Browne insisted that this was the only time the officers got out of the vehicle and entered the crowd Wednesday night. While walking away from the crowd, CHP says a protester tried to remove one of the officers’ hoodies and then punched the officer in the back of the head. They both fell to the ground in a struggle. A second officer displayed his badge, according to CHP, and was then approached by “30 to 50” protesters. He escalated from using a baton, which he already had drawn, to his service weapon, with the goal of dispersing the crowd. CPH described the action as “controlled and restrained.”

The officers involved will remain on active duty, CPH said. The use of informants and plain clothes officers within the crowd will continue. The protester seen arrested in the photos, whose identity was not revealed by CHP, was charged with felony assault and battery on a police officer.

Photo via teknorat/Flickr (CC BY SA 2.0)