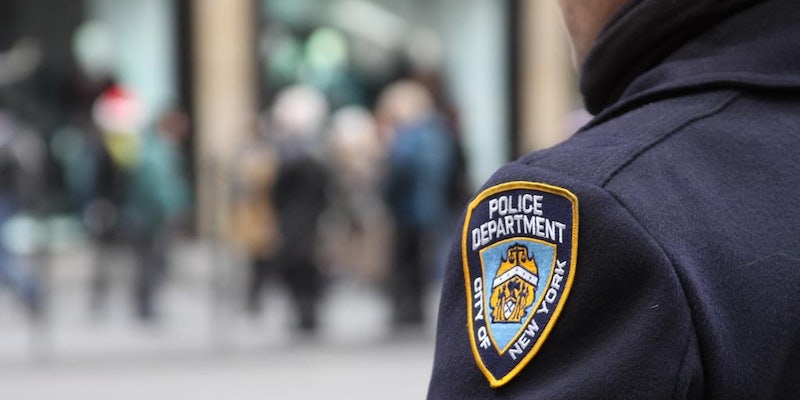 The NYPD makes a statement.

At the funeral for one of the two officers slain in their squad car a week ago, the NYPD literally turned its back on Mayor Bill de Blasio today. The memorial service was broadcast live to thousands who gathered outside Christ Tabernacle Church in Queens to pay their respects to slain officer Rafael Ramos, who was killed after he and his partner Wenjian Liu were shot point blank in their squad car a week ago.

NYPD asks #BlackLivesMatter not to protest for days after cop-killing; protest, turn backs on mayor at funeral itself pic.twitter.com/Zd9H8fIVBq

Photos and reports that emerged from the service showed hundreds, possible thousands of NYPD officers outside the church with their backs turned as de Blasio appeared on the live broadcast. “All of this city is grieving and grieving for so many reasons,” de Blasio said in his remarks. “But the most personal is we’ve lost such a good man and a family is in such pain.” Vice President Joe Biden also spoke at the service.

Tensions between the mayor, the city, and the police force have escalated considerably following the death of the two NYPD officers. They initially spiked in early December, following a grand jury’s decision to not indict officer Daniel Pantaleo, who killed Eric Garner in an unlawful chokehold this July.

Ismaaiyl Brinsley, the shooter who ambushed Ramos and Liu, appears to have acted in retaliation, though he is understood to be a lone actor widely denounced by the ongoing protest effort in New York.

Update Dec. 27, 4:15pm: The mayor’s office released a statement addressing the snub this afternoon: “The Ramos and Liu families, our police department and our city are dealing with an unconscionable tragedy. Our sole focus is unifying this city and honoring the lives of our two police officers.”

Photo via Dave Hosford/Flickr (CC BY-2.0)