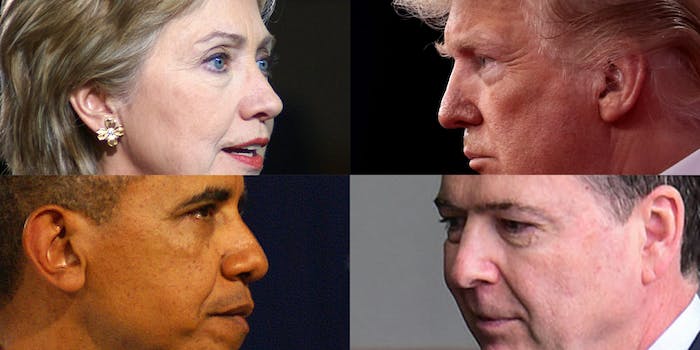 There's a lot to unpack in 'Crossfire Hurricane.'

Late last night, the New York Times dropped a detailed report on the origin of the FBI’s investigation into the Trump campaign’s ties to Russia.

The Times confirms a Washington Post report that’s been rollicking Washington over the past week: The FBI had a “secret intelligence source” that was working with the Trump campaign.

The F.B.I. obtained phone records and other documents using national security letters — a secret type of subpoena — officials said. And at least one government informant met several times with [Trump advisors] Mr. [Carter] Page and Mr. [George] Papadopoulos, current and former officials said. That has become a politically contentious point, with Mr. Trump’s allies questioning whether the F.B.I. was spying on the Trump campaign or trying to entrap campaign officials.

On Twitter, Trump called the news—despite his frequent insistence that stories produced by the Times and other publications are false or inaccurate—”bigger than Watergate.”

Congratulations America, we are now into the second year of the greatest Witch Hunt in American History…and there is still No Collusion and No Obstruction. The only Collusion was that done by Democrats who were unable to win an Election despite the spending of far more money!

Wow, word seems to be coming out that the Obama FBI “SPIED ON THE TRUMP CAMPAIGN WITH AN EMBEDDED INFORMANT.” Andrew McCarthy says, “There’s probably no doubt that they had at least one confidential informant in the campaign.” If so, this is bigger than Watergate!

The Times story goes into depth about the investigation—dubbed Crossfire Hurricane, after a Rolling Stones’ lyric—revealing how agents cautiously undertook an investigation and were extremely hesitant to go public with news about the Trump campaign’s possible ties to Russia, regardless of having evidence.

The facts, had they surfaced, might have devastated the Trump campaign: Mr. Trump’s future national security adviser was under investigation, as was his campaign chairman. One adviser appeared to have Russian intelligence contacts. Another was suspected of being a Russian agent himself.

The reason they kept this information secret, despite announcing the results of their investigation into Hillary Clinton’s email server, is one you’d expect: They assumed Trump would lose the election.

But underpinning both cases was one political calculation: that Mrs. Clinton would win and Mr. Trump would lose. Agents feared being seen as withholding information or going too easy on her. And they worried that any overt actions against Mr. Trump’s campaign would only reinforce his claims that the election was being rigged against him.

The story also notes that while the investigation was in its infancy, FBI agents were skeptical there was a real case there, yet were bewildered by the behaviors of Trump.

Crossfire Hurricane began exactly 100 days before the presidential election, but if agents were eager to investigate Mr. Trump’s campaign, as the president has suggested, the messages do not reveal it. “I cannot believe we are seriously looking at these allegations and the pervasive connections,” Mr. Strzok wrote soon after returning from London.

Mr. Trump was not under investigation, but his actions perplexed the agents. Days after the stolen Democratic emails became public, he called on Russia to uncover more. Then news broke that Mr. Trump’s campaign had pushed to change the Republican platform’s stance on Ukraine in ways favorable to Russia.

While this might be news that Republicans would react favorably to—that the FBI could have sunk Trump but didn’t—it’s not being treated that way, given the Bureau is currently in conservatives’ crosshairs.

In the article, the Times portrays a cautious FBI that, although it made mistakes, behaved as best it could. Conservatives see this story as laundering the FBI’s behavior in advance of an upcoming Inspector General report about the FBI that’s already been deemed “scathing.”

From the Federalist’s Mollie Hemingway:

Likewise, the admissions in this New York Times story are coming out now, years after selective leaks to compliant reporters, just before an inspector general report detailing some of these actions is slated to be released this month. In fact, the Wall Street Journal reported that people mentioned in the report are beginning to get previews of what it alleges. It’s reasonable to assume that much of the new information in the New York Times report relates to information that will be coming out in the inspector general report.

By working with friendly reporters, these leaking FBI officials can ensure the first story about their unprecedented spying on political opponents will downplay that spying and even attempt to justify it. Of note is the story’s claim that very few people even knew about the spying on the Trump campaign in 2016, which means the leakers for this story come from a relatively small pool of people.

It was a sentiment echoed online.

But, after all that, there’s still this.

I have misheard this lyric as "Class 5 hurricane" all my life:

"The name, a reference to the Rolling Stones lyric 'I was born in a crossfire hurricane,' https://t.co/L5L7thy9r4

Talk about a bombshell.

You can read the Times report here.