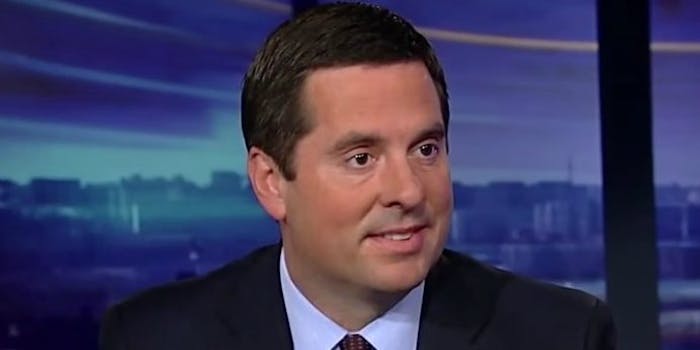 The House Intelligence Committee chairman says he doesn't intend to share his sources with his colleagues.

House Intelligence Chairman Devin Nunes said he intends to withhold the source of a leaked classified report from fellow members of his own committee.

“We will never reveal those sources and methods,” the Republican congressman told a Fox News reporter, according to Reuters, regarding documents that allegedly detail the legal and incidental interception of Trump transition team communications by a U.S. intelligence service—presumably the National Security Agency (NSA).

It was revealed on Monday that Nunes met with the unnamed source at the White House, where he reportedly viewed the report in a secured room a day before selectively disclosing the contents at an impromptu press conference without first informing fellow committee members.

Unconfirmed rumors have begun to circulate around Washington about Nunes’s source: Michael Ellis, a former Nunes staffer who now serves in the White House counsel’s office, has received the lion’s share of the conjecture.

Already embattled over his choice not to share the intercepts with other members of the House Permanent Select Committee on Intelligence (HPSCI) before briefing President Donald Trump on their contents, Nunes’s decision to shield his source, even in a closed forum, is likely to only stir the pot further.

Top Democrats in the House have already called on Nunes’s to recuse himself from the panel’s investigation into Russian interference in the 2016 election, which includes a probe into possible coordination between the Trump campaign and Russian operatives whom U.S. intelligence chiefs credit with last summer’s infiltration of Democratic National Committee servers.

Others Republican have already called for the investigation to be taken away from the HPSCI, including Sens. John McCain of Arizona and Lindsey Graham of South Carolina, both of whom favor the formation of a special committee to investigate Russia.

House Speaker Paul Ryan (R-Wisc.), who appears leery of stepping on any White House toes, has thrown his full support behind Nunes. Both have begun repeating to reporters that the “Russia issue” has been going on “for many, many years”—or long before the Trump’s insurgent campaign began a year and half ago, in other words.

Further demonstrating the irreparable breakdown of the HPSCI’s ability to conduct a nonpartisan investigation, Rep. Adam Schiff, the panel’s top Democrat, issued a stunning statement on Monday in which he called for Nunes to recuse himself—both from the investigation into Russia and any “oversight of matters pertaining to any incidental collection of the Trump transition,” of which Nunes served as an executive committee member.

Prior to the election, Nunes was a vocal supporter of Trump, flying with the then-candidate on his private jet in California, and helping raise at least $1.3 million for the Trump campaign.

Asked by reporters if he would continue to lead the investigation on Tuesday morning, Nunes responded: “Why would I not?”