According to a newly declassified FISC ruling, the NSA violated the Fourth Amendment in collecting Americans' data.

According to a heavily redacted FISC ruling declassified by the U.S. government after a year-long battle with the Electronic Frontier Foundation, “the information [the NSA was] collecting is fundamentally different from what the court had been led to believe.”

That segment is hard to find, though: 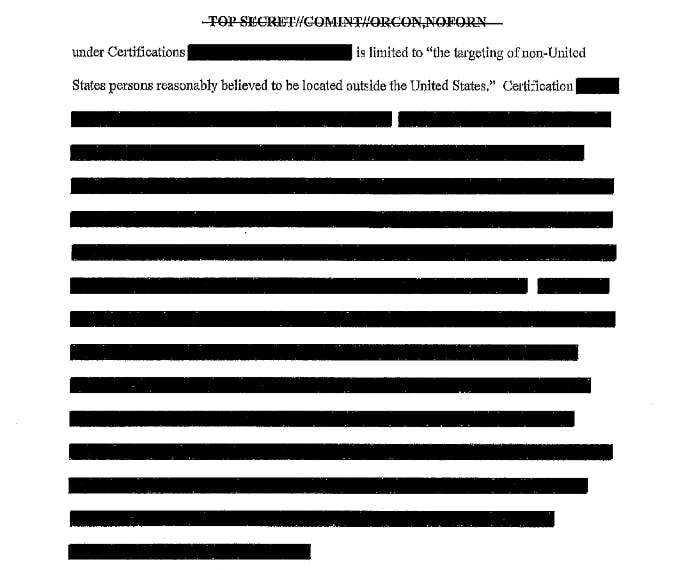 In particular, the FISC found that the scope and targeting procedures used by the NSA to collect Internet data were in violation of Americans’ Fourth Amendment rights, which guarantee protection from illegal search and seizure.

The case dealt with Section 702 of the 2008 amendment to the Foreign Intelligence Surveillance Act (FISA), which dictates the parameters by which the NSA may conduct surveillance involving U.S. citizens. Specifically, Section 702 allows the agents to capture messages involving American citizens if their “target” is outside the country.

According to the FISC ruling, about nine percent of the 250 million Internet communications acquired by the NSA each year through the FISA are obtained by upstream data collection. Upstream collection refers to instances in which the agency directly intercepts information moving through fiber optic Internet cables (as opposed to through partnerships with Silicon Valley and telecom companies).

This collection is governed by a series of procedures used to minimize the capturing of innocent Americans’ private communications. The ruling stated that the court was “unable to find that the NSAs targeting and minimization procedures…are consistent with the Fourth Amendment.”

The 86-page document explained that while the Court had been made aware of—and approved of—the agency collecting Internet data sent to or from a target even when it involved a U.S. citizen, it was not aware that communications “about” a target were also captured. By “about,” the court clarifies that it means any communications that even mention a target’s name.

The FISC also pointed out that the NSA had been “acquiring internet transactions since before the court’s approval.”

While the ruling indicates that the NSA appears willing to mislead the court about the scope of its collections, it also shows that the FISC does appear to exert some oversight over the agency’s activities.

Previously, the FISC has been called a “rubber stamp” court, as it has only denied a handful of the thousands of requests for Americans’ information that it has recieved since its establishment in 1978.