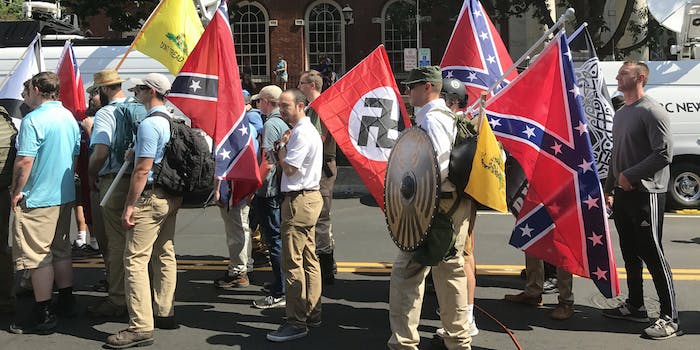 She was inspired by an injured friend in Charlottesville.

A former National Security Agency analyst is targeting white supremacist groups on Twitter, and she says she’s trying to do the job the social media site can’t—or won’t—do in ferreting out hate speech on its platform.

Emily Crose, who’s now a cybersecurity professional, told Business Insider that she developed a technology she calls Nemesis that uses artificial intelligence to find white supremacists by the symbols they use in photos and videos. The technology scans photos for symbols like the Confederate flag or Pepe the Frog. As Business Insider explains, “she used TensorFlow to train her app to spot the images, a popular free and open source AI development technology created by Google.”

“I’m currently working on porting the beta system to a production system that we can then run on a front end with Twitter,” she told the website.

Here’s an example of how it works.

Crose said she was inspired to develop the technology after the neo-Nazi march in Charlottesville, Virginia, where one of her friends was attacked and injured in August.

“The real goal is to educate people,” Crose told Motherboard. “And a secondary goal: I’d really like to get the social media platforms to start thinking how they can enforce some decency on their own platforms, a certain level of decorum. … I’m not one of these people who’s going to be OK with apathetically standing by and watching people turn to an ideology that’s probably dangerous.”

Perhaps the biggest question, though, is this.

If I can do this as an individual with few resources, @TwitterSafety should be able to do this easily. The question is, why haven't they? https://t.co/Qszji01vHt