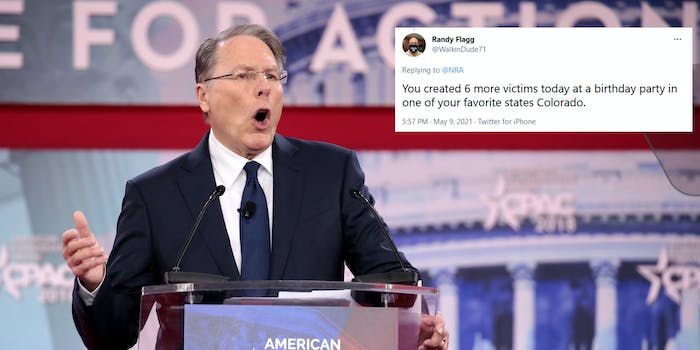 The National Rifle Association (NRA) is facing a heap of criticism and scorn over its Mother’s Day tweet that was sent the same day as a mass shooting in Colorado that left seven people dead.

A gunman killed six members of his extended family before killing himself at a birthday party in Colorado Springs, according to reports. The shooting occurred around midnight on Sunday morning, the Colorado Springs Gazette reports.

Given that the shooting occurred on Mother’s Day, many people online felt that the NRA’s aggressively pro-gun tweet celebrating the holiday was in poor taste.

The gun-rights group tweeted a meme to celebrate the holiday that had a woman and a child both holding guns. The text over the image says “Mama didn’t raise a victim.”

“Happy Mother’s Day to all NRA moms! On top of the millions of other jobs moms have, NRA moms fight for our right to self-defense, while also defending themselves, their families, and communities. We are forever grateful for these fierce women,” the NRA tweeted with the image.

The tweet isn’t going over well. As of Monday morning, it had nearly 10,000 replies.

“Where was the good guy/mom/daughter with a gun in Colorado today?” another Twitter user wrote.

“There was a(nother) mass shooting today, yet this cult is literally trying to tell you that a gun is a solution when guns are the exact reason why 6 people were murdered in such rapid succession,” one Twitter user chimed in.

Fred Guttenberg, the father of a victim of the Parkland shooting, repurposed the NRA’s tweet and wished a happy Mother’s Day to “all of the grieving moms.”

“Happy Mother’s Day to all of the grieving moms. On top of millions of other jobs moms have, far too many have to take care of families destroyed by gun violence. Today, my wife started Mothers Day at the cemetery, visiting our daughter who was murdered in the Parkland shooting.”

Many other people online criticized the timing of the tweet.

But bad tweets are just part of the NRA’s brand.