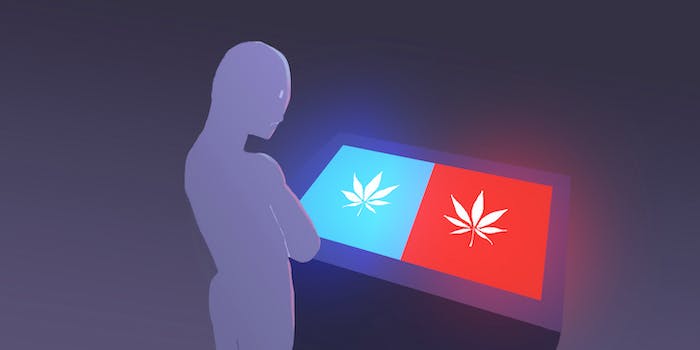 Tuesday’s vote fails to change the landscape on marijuana laws

All in all, it was pretty uneventful day for marijuana in the U.S.

On Tuesday, Ohio had the opportunity to become the fifth state to legalize marijuana and join Colorado, Washington, Oregon, and Alaska, where the drug is already legal. But that didn’t happen.

In fact, Tuesday’s votes had little effect on marijuana laws overall, except to maintain or retain taxes on pot smokers—money that, in most cases, has been allocated by state legislators towards education and drug prevention. But for those closely following the evolution of marijuana law in the United States, here what happened on Nov. 3.

Ohioans voted down Issue 3, which would have allowed anyone 21 or older to purchase, possess, transport, use, and share up to one ounce of marijuana. Roughly 64 percent of the votes tallied by Wednesday morning voted against the measure, with only a handful of precincts remaining.

Had the vote gone the other way, Ohio would have established a Marijuana Control Commission to regulate marijuana cultivation and the retail sales taxation. Certain regulations were decided beforehand: for instance, the total number of allowed marijuana retailers was set at 1,159, or 1 store for every 10,000 Ohioans. The shops would not have been permitted within 1,000 feet of public schools, state-licensed day care centers, or places of worship.

Issue 3 was complicated by the fact that it would have effectively established a monopoly on commercial marijuana by adding a constitutional amendment that granted just 10 properties, which were pre-selected by the legislation, as the sole sources of commercial pot in the state. A separate ballot initiative, Issue 2, would have negated Issue 3 by establishing any “monopoly, oligopoly, or cartel” in the Ohio Constitution. Both issues failed.

While recreational marijuana in Ohio will (for now) remain illegal, the vote may signal a sea change in the debate over medicinal use of the drug. Rep. Ryan Smith (R) told the Columbus Dispatch on Wednesday: “After going through this process, myself and many of my colleagues realize there’s tremendous support for medical marijuana and something we should have a bigger discussion about.”

Coloradans voted in favor of a measure known as Proposition BB, which gives the state government permission to retain about $66 million in marijuana tax revenue collected during the 2014-2015 fiscal year. Had voters rejected the proposition, the money would have been refunded to retail marijuana cultivators and purchasers through a temporary reduction in marijuana sales tax.

Around $40 million has been earmarked for school construction with the rest going toward drug education and prevention, youth mentoring, and school grants.

In possibly the least exciting marijuana vote in U.S. history, 57 percent of Washingtonians voted to maintain a $1 fee for marijuana recognition cards. The ballot initiative itself was non-binding, meaning the state’s legislators weren’t actually required to institute any changes had their constituents voted to repeal the tax.

State authorities are unable to accurately determine the cost of the $1 tax, but the Washington Office of Financial Management estimates it will raise a mere $4 million over the next 10 years.

Washington’s flat 37 percent excise tax on recreational marijuana generated about $70 million in revenue for the state during the first year of legalization. As of June 2015, Washington marijuana dispensaries had sold more than $257 million worth of marijuana.