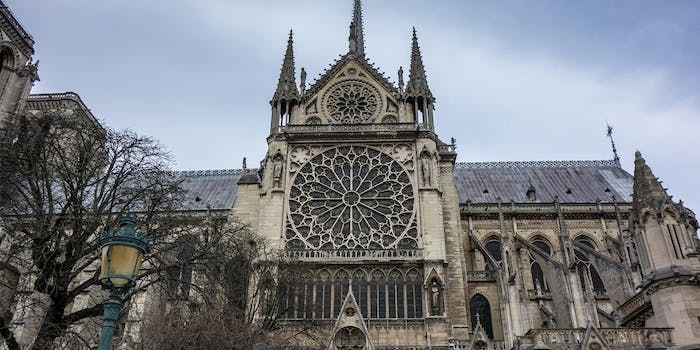 The building was completed in the 1200s.

Today, Notre Dame, an iconic cathedral in Paris, caught fire, with videos of the blaze going viral. Videos show the spire of the church collapsing.

Here’s the video of Notre Dame cathedral’s spire collapsing amidst the flames.https://t.co/uR2LWrIFGJ

Notre Dame, Paris, is on fire and it feels like the end of the world. pic.twitter.com/qYYk7ewipq

BREAKING: The roof of the Notre Dame Cathedral has collapsed into the church: pic.twitter.com/gXTUzRXV9L

The videos show a shocking blaze, which consumed the entire roof of the structure.

#NotreDame: 'The roof has entirely collapsed, there are flames coming out the back of the cathedral as if it was a torch'@charli, Journalist at France 24, at the scene of the fire. pic.twitter.com/2B0IrMiDcL

The venue is a popular tourist attraction in Paris, and Twitter users mourned watching the structure engulfed.

My heart breaks for the people of Paris after seeing the fire at Notre Dame Cathedral. Praying for everyone’s safety.

Notre Dame was in the midst of a $7 million renovation, and early reports indicate that the fire was linked to that work. The cathedral was completed in 1260.

Update 1:38pm CT, April 15: According to numerous reports, the entire frame of the structure is on fire.

Notre Dame spokesperson: “Everything is burning, nothing will remain from the frame pic.twitter.com/lDH3y0lC5f

Authorities said that firefighters are attempting to salvage what they can of the artwork.

It does appear that effort was successful, at least in part.

President Donald Trump weighed in on the matter, saying authorities in France should dump water from planes on it, and that they “must act quickly.”

So horrible to watch the massive fire at Notre Dame Cathedral in Paris. Perhaps flying water tankers could be used to put it out. Must act quickly!