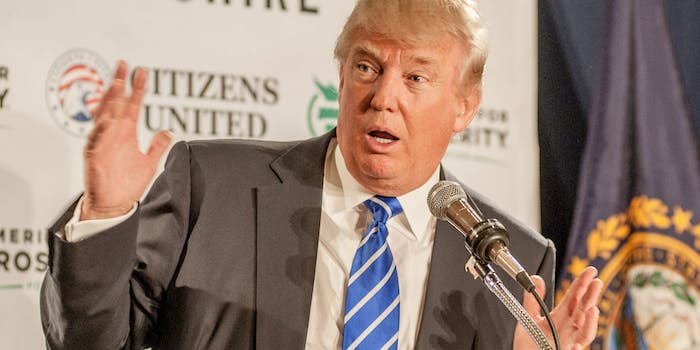 A senior North Korean official lashed out at President Donald Trump on Friday, warning that his “aggressive” tweets were bringing the two countries to the “the brink of war.”

In an exclusive interview with the Associated Press in Pyongyang, Vice Foreign Minister Han Song Ryol criticized the president for stirring tensions through a “vicious cycle” of provocations.

“Trump is always making provocations with his aggressive words,” Han said during the 40-minute interview. “So that’s why [tensions are escalating]. It’s not [North Korea] but the U.S. and Trump that makes trouble.”

Had a very good call last night with the President of China concerning the menace of North Korea.

I have great confidence that China will properly deal with North Korea. If they are unable to do so, the U.S., with its allies, will! U.S.A.

“If the U.S. comes with reckless military maneuvers then we will confront it with the DPRK’s pre-emptive strike,” he stated bluntly, referencing the abbreviation of North Korea’s official name, the Democratic People’s Republic of Korea.

“We’ve got a powerful nuclear deterrent already in our hands, and we certainly will not keep our arms crossed in the face of a US pre-emptive strike,” Han continued. “We will go to war if they choose.”

Journalists from around the world are currently in the nation’s capital ahead of national holiday celebrations to take place on Saturday, the 105th birthday anniversary of current leader’s grandfather and regime founder Kim Il Sung. The regime is expected to showcase its latest weapons and military strength in a parade to mark the event.

Although international relations with North Korea have always been strained by its ongoing nuclear and ballistic missile tests, Trump decided last week to step up military pressure on the country by redeploying a U.S. navy strike group—the USS Carl Vinson aircraft carrier and its support ships—to the Korean peninsula.

The dramatic order raises the stakes so much that it has split even the president’s dedicated supporters in the U.S.—many of whom are politically committed to an anti-interventionist foreign policy.

The latest episode is rooted in the belief that North Korea is preparing its sixth nuclear test and may develop ballistic weapons capable of reaching the  U.S. western seaboard during Trump’s term. Multiple senior U.S. intelligence officials have already said they are prepared to launch a preemptive conventional weapons strike against Pyongyang if a nuclear weapons test appears imminent.

Despite China’s calls for peaceful negotiations and the implementation of trade sanctions rather than military action, Japanese ships joined Trump’s “armada” and North Korea is refusing to back down.

“As long as the nuclear threats and blackmail go on with the military exercises, we will carry forward with our national defence build-up, the core of which is the nuclear arms build-up,” Han said.

“Whatever comes from the U.S., we will cope with it. We are fully prepared to handle it.”