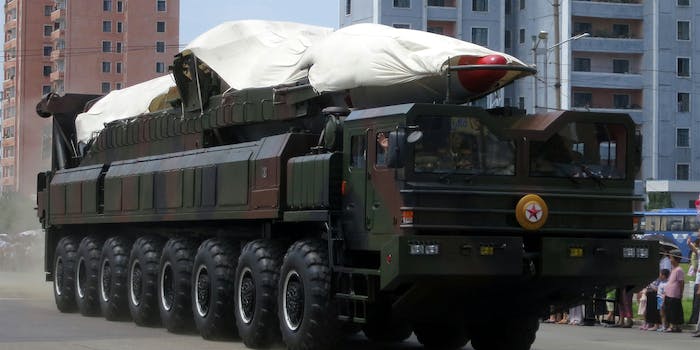 Here’s why the North Korea threat is so complicated

This problem can't be solved with bombs.

The United States appears to be closer to a nuclear standoff with North Korea than ever before.

President Donald Trump on Wednesday morning bragged about the size of the United State’s nuclear arsenal. The president promised on Tuesday that any threat from North Korea to the United States would be “met with fire and fury”. A few hours later, reports that the North Korean government was “carefully examining” plans to strike the U.S. territory of Guam broke in state-run North Korean media.

The harsh exchange between Trump and Kim Jong-Un has prompted a nuclear-level meltdown on Twitter, with Hiroshima jokes and mushroom-cloud memes deafening more sober conclusions from experts.

If you want my advice, get off Twitter and go to dinner. The nuclear war isn't tonight. (And, if it is, you'll have had a nice meal!)

Standoffs between the U.S. and North Korea are nothing new. But the perception of unpredictability of North Korean dictator Kim Jong-un and President Trump have created what feels like an explosive moment for both countries and the world.

Dealing with the looming threat is not as simple as just “taking out” Kim or North Korea’s arsenal, as some Trump supporters have suggested. But doing nothing is not an option either. Here’s a quick rundown of how we edged closer to the brink of nuclear annihilation—and why it’s now difficult to move in either direction.

Getting up to speed

Tensions with Pyongyang reached a boiling point after a series of events that began over the weekend. The United Nations Security Council on Saturday voted to impose its most serious set of sanctions yet on North Korea due to its recent missile tests. A total of $1 billion in exports—roughly a third of North Korea’s economy—are banned under the sanctions. North Korea threatened to take “physical action” in response to the U.N.’s decision and promised to take “thousand-folds” revenge against the United States for its role in imposing the sanctions.

Less than 72 hours later, the Washington Post reported that the Defense Intelligence Agency confirmed what some have expected for years—that North Korea has developed a miniaturized nuclear warhead small enough to fit on a missile. North Korea’s nuclear capabilities have always appeared to be a distant threat due to their primitive technology. The U.S. military’s assessment changes that equation.

While the latest developments mean that North Korea’s scientists reached a pivotal milestone years earlier than anyone expected, the nation likely still lacks the ability to strike mainland United States. That means you don’t need to stock up on freeze-dried rations or build a backyard fallout shelter quite yet.

“I assume what North Korea means by miniature is that it is small enough to be carried by their rocket,” Coyle said. “But this North Korean rocket does not have a lot of payload carrying capacity.”

North Korea appears to lack an adequate re-entry vehicle that would protect its warhead from melting in the event of a launch. The last re-entry vehicle built by the North Koreans for its July 28 nuclear test likely broke apart toward the end of the launch.

But even if North Korea still lacks the technology to strike the United States, there’s plenty that can go wrong in the offing.

All options lead to disaster

Trump said he may consider a preemptive or “surgical strike” on North Korea as a last-resort measure. But there’s a reason why the U.S. has steered clear of deploying hard power on Pyongyang. A surgical strike would surely cause North Korea to retaliate by launching its artillery guns—and potential its nuclear bombs—on nearby South Korea and Japan. Millions of lives would potentially be lost. North Korea, which has the fourth largest military in the world, has twice the number of troops as South Korea. If North Korea ever strikes South Korea, the United States is under pact to come to South Korea’s aid.

Defense Secretary James Mattis told a House committee earlier this year that the U.S. launching a surgical strike on North Korea would lead to warfare at a level not seen in decades.

“It will be a war more serious in terms of human suffering than anything we’ve seen since 1953,” Mattis said in testimony before the House Appropriations committee in June, referring to the last year of the Korean War.

As Mark Bowden writes in the Atlantic, all other options facing the U.S. are also terrible. An all-out attack would likely have the same horrific effect as a more precision attack. And assassinating Kim is both unlikely to succeed and could trigger a nuclear strike in retaliation, regardless of whether Kim is alive.

It is unquestionable that the United States would win in any standoff with North Korea, but the costs of such a war would be too great. U.S. relations with South Korea, Japan, and China would likely be damaged, and the world would have to address how to rebuild a war-torn North Korea.

It’s true that the latest sanctions on North Korea approved by the U.N. are the harshest measures yet. The sanctions include selling goods such as coal, iron, iron ore, seafood, lead, and lead ore. It will also prevent North Korean workers from seeking work abroad.

But, as the Atlantic points out, North Korea’s methods for evading sanctions have grown increasingly sophisticated over the years. Engaging in illicit trade with African nations or creating fake Chinese front companies are just a couple of tactics devised by North Korea to cheat sanctions.

Further, losing $1 billion in trade may not make a huge difference to a dictatorship that cares very little about the lives of its people. In fact, research from Stanford University indicates that sanctions on North Korea have harmed the nation’s rural poor much more than the regime’s decision-making elite.

In short, the sanctions alone are likely not enough to push Kim to launch a nuclear attack—or any other kind of attack—on another nation, which would almost certainly result in far greater consequences for the Hermit Kingdom and its leadership.

A whopping 90 percent of North Korea’s trade is controlled by China. China also provides North Korea with virtually all of its food and energy assistance. While China has buckled to international pressure on North Korea and imposed some sanctions, it’s unlikely the nation takes harsher measures. A regime collapse or even a less stable North Korea will be a major headache for China, which would likely have to take in refugees or deal with the threat of loose nukes.

Not to mention that China’s relations with Trump are more strained than that of any previous American president in recent memory. Trump’s tweets calling out China for currency manipulation and their inability to control North Korea has not made the president many fans in Beijing.

Anything is possible, but signs indicate that the State Department will attempt to pull the U.S. back from the edge that Trump helped push us to. Meanwhile, progressive activists are pushing for legislation that would require consent from Congress before Trump could launch a nuclear strike.

That said, North Korea is unlikely to back down from its incendiary rhetoric. And, perhaps most concerning, Secretary Mattis has issued an ultimatum that further escalates the ongoing war of words, commanding the North Korean regime to “cease any consideration of actions that would lead to the end of its regime and destruction of its people.”