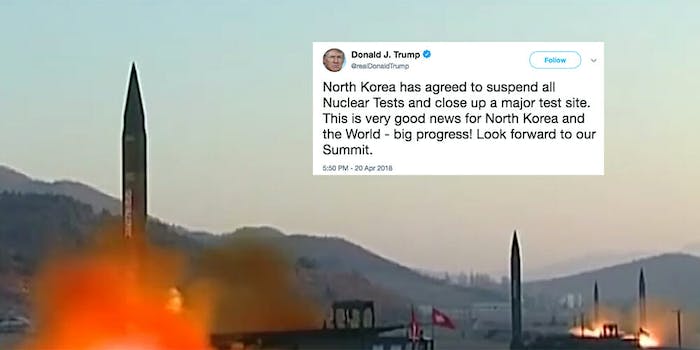 North Korea will immediately suspend nuclear and missile tests and “dismantle” a nuclear test site with the goal to build economic growth, the North’s state media said on Friday. The news comes ahead of planned talks between South Korea and the U.S.

Per Reuters, North Korean leader Kim Jong-un said the country has reached its goal of developing nuclear weapons and therefore no longer needs to conduct tests of nuclear weapons or ballistic missiles.

“We will concentrate all efforts on building a powerful socialist economy and markedly improving the standard of people’s living through the mobilization of all human and material resources of the country,” state media said.

President Donald Trump, who is expected to meet with North Korean leadership in late May or early June, tweeted praise for the news Friday evening.

North Korea has agreed to suspend all Nuclear Tests and close up a major test site. This is very good news for North Korea and the World – big progress! Look forward to our Summit.