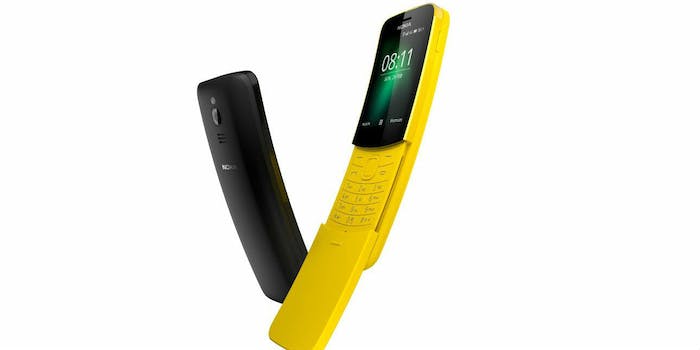 Nokia to revive Neo’s iconic ‘banana’ phone from ‘The Matrix’

First a revamped 3310 brick, now a refresh of the legendary “banana phone.” Nokia is once again relying on nostalgia to point attention toward its new smartphones.

First released in 1996, the Nokia 8110 was revolutionary for introducing the trendy “slider” form that brought the phone’s microphone closer to its user’s mouth and protected its keypad. Just like the original, the new 8110 is curved like a boomerang and includes a slide cover used to unlock the phone and accept calls. Playing off its whimsical banana shape, the Nokia 8110 comes in a bold yellow or black paint job.

Its popularity exploded when it was featured in the original Matrix film in 1999 back when Nokia was the world’s leading smartphone manufacturer.

You can see Keanu Reeves, aka Neo, making the phone look even cooler than it already is in the clip below.

The new “Nokia” under Finnish startup HMD, introduced the new Nokia 8110 at Mobile World Congress on Sunday, one year after it unveiled a new Snake-playing 3310.

Like the new 3310, the 8110 is more a collector’s item than a useable phone. At least, not by today’s standards. Running Smart Feature OS, the device can’t access the millions of apps on the Google Play Store. Instead, Nokia is building its own app store that is said to feature Facebook, among other popular apps. Unlike the mostly useless 3310, the 2.4-inch 8110 does support 4G LTE mobile speeds. Other specs are what you’d expect from a feature phone: a low-end Qualcomm 205 processor, 512GB of RAM, 4GB of storage, and a 2-megapixel camera.

The 8110 will be available in May for $97 and will come preloaded with an updated version of Snake.