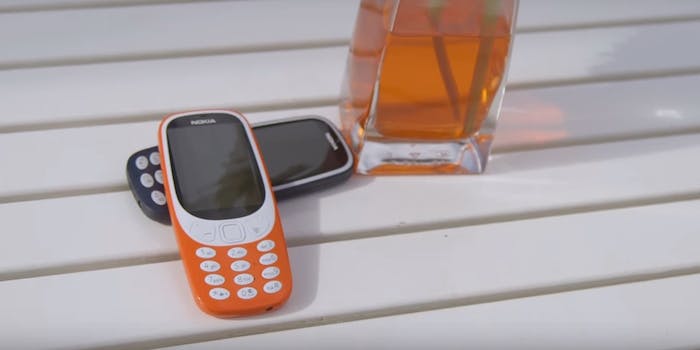 The Nokia 3310 is even less practical than you imagined

The internet is going crazy over Nokia’s refreshed 3310 phone, but you wouldn’t have known that if you own one. That’s because the updated version of this iconic device is basically unusable in several countries, including the United States.

Nokia made the questionable decision to keep the original 3310’s dated 2G compatibility, instead of upgrading it to something more 2017, like 4G or LTE. The phone only supports GSM 900MHz and 1,800MHz bands—frequencies most major carriers in the United States, Canada, and Australia, have already dropped, or plan to do so.

According to AT&T, anyone with a 2G phone won’t be able to:

And that’s not the end of it.

Nokia made another confusing (OK, awful) decision when it chose not to put a Wi-Fi antenna in the new 3310. The phone, by today’s definition, really isn’t a phone at all, but is better suited as a portable MP3 player. Through that lens, it does a better job than some of today’s most expensive phones on the market. Not only does it come with Bluetooth (really? Bluetooth but no Wi-Fi?), but it also has a 3.5mm headphone jack.

If that’s not enough, it does come pre-loaded with some classic games.

The new Nokia 3310 will launch globally starting this year. HMD’s head of marketing, Patrick Mercanton, told CNET it will take a little longer to ramp up in the United States, “We’ll probably end with the US at some point. It’s definitely on our radar… we want to go into the US because we want to have a global launch.”