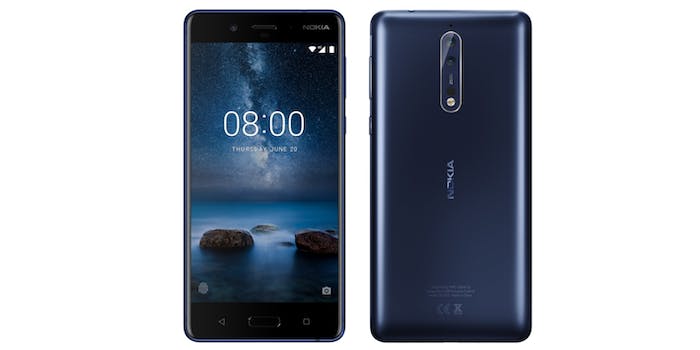 It's rumored to launch July 31.

Reputable leaker Evan Blass posted an image to VentureBeat Monday of what he claims is the upcoming Nokia 8, the brand’s first flagship Android phone.

As you can see, the phone sports a dual-lens camera with Carl Zeiss optics. That fits nicely with HMD’s announcement earlier this month that it would be reviving a partnership with Zeiss that dates back to the Windows Phone 7 days. The leaked device also looks a lot like the mysterious phone shown in a video posted by Blass in May.

The rumored specs are right in line with what you’d expect from a modern-day flagship smartphone. The Nokia 8 is said to feature a 5.3-inch (2560×1440) display, Qualcomm Snapdragon 835 processor (the one that powers the Galaxy S8), 4 or 6GB of RAM, 64GB of storage, and dual-SIM models.

Fingers crossed that the two rumored 13MP cameras on the back are as good as those of past Nokia devices. They might need to be considering the phone doesn’t look to sport the gorgeous infinity displays found on the Samsung Galaxy S8 and LG G6. It is, however, expected to run stock Android 7.1.1 Nougat out of the box.

The VentureBeat leak only shows the Nokia 8 in a stunning deep blue color. It is also expected to be available in silver and gold on its rumored July 31 release date.