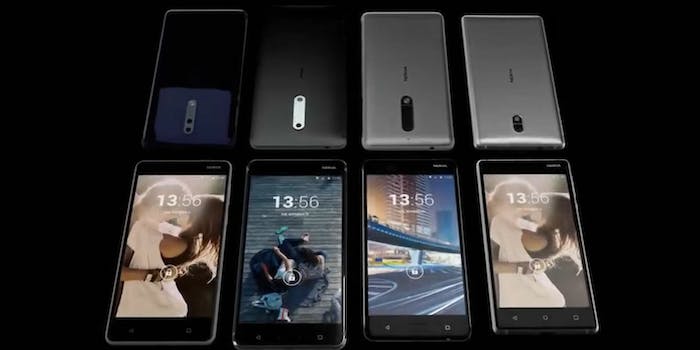 Is this the long-rumored iPhone competitor?

HMD made a huge splash by redesigning the Nokia 3310, but it will need to pull some of that attention onto its upcoming flagship phones if it is going to be successful against the likes of the iPhone or Galaxy devices.

The new owners of the legendary label did released three new Android-powered smartphones at Mobile World Congress in February, but it still hasn’t revealed the flagship phone everyone has hoping for.

A video discovered by reputable leaker Evan Blass (better known as @evleaks) appears to show an unannounced Nokia phone. The video was taken down, but the evidence remains.

This is the first time we have seen a Nokia phone with a dual-lens camera setup. It is a feature usually reserved for high-end devices, so there is a decent chance that what we’re looking at is the rumored Nokia 8 (or 9).

But before you get too excited, do note that the mysterious device doesn’t exactly stand out from the rest of the phones in the video. It doesn’t have the largest screen, or any interesting design elements, like an edge-to-edge display.

Nokia is expected to release at least three more phones this year, so we’ll just have to wait and see if the unknown cast member ends up being the 7, 8, or 9.