Everything you need to know about Nokia’s 3 new smartphones

This is the new Nokia.

The outlier of the four is the Nokia 3310, an homage to one of the most respected devices in the business and a message to everyone that the brand intends to pick up where it left off.

As delightful as it is to see the rebirth of such an infamous device, it’s the other three smartphones the Finnish company will hope can compete against the likes of Samsung and Huawei. The company appears to be doing what Nokia has always done best: focusing on hardware and letting pure Android Nougat (aside from the camera app) take care of the rest.

Here is everything you need to know about the first lineup of phones from the new Nokia.

Released earlier this year for China, the Android-powered Nokia 6 will now be available globally. The already popular device instantly sold out during its first launch, receiving 1.3 million pre-orders in the first four days on the market.

Its design sets the tone for Nokia’s other devices. We think it looks sharp overall, with a bit of a Galaxy Note 6/7 look in the front and some Lumia 900 series in the back. 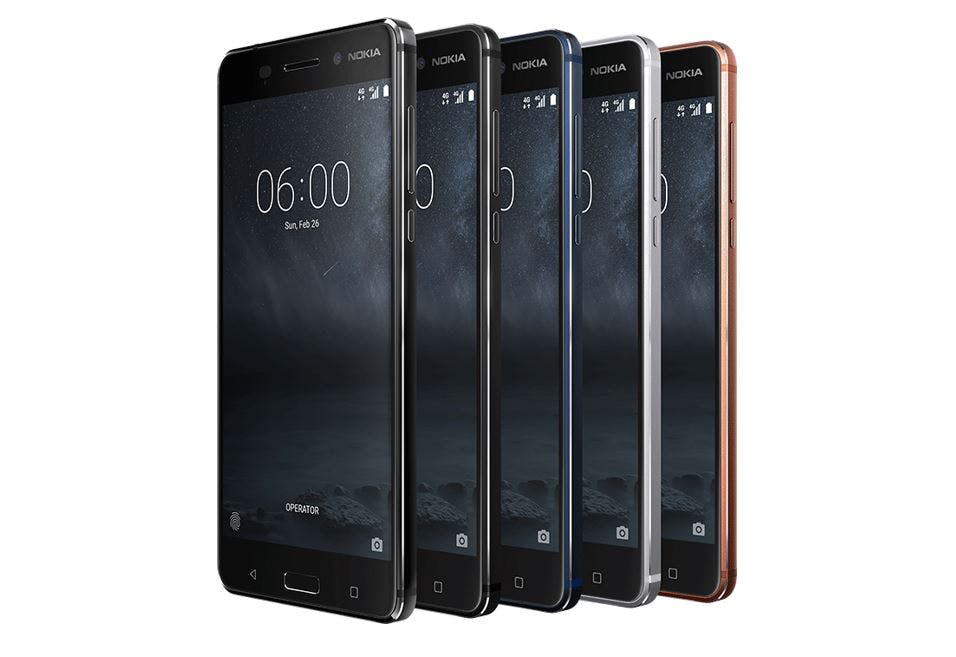 You are probably wondering if you should expect the Nokia durability of old. HMD claims its “precision-milled” aluminum will give the 6 some added toughness, and a Gorilla Glass-covered screen should do a decent job preventing scratches and other damage. Just don’t expect it to survive as many drops as the practically invincible Nokia brick phones. 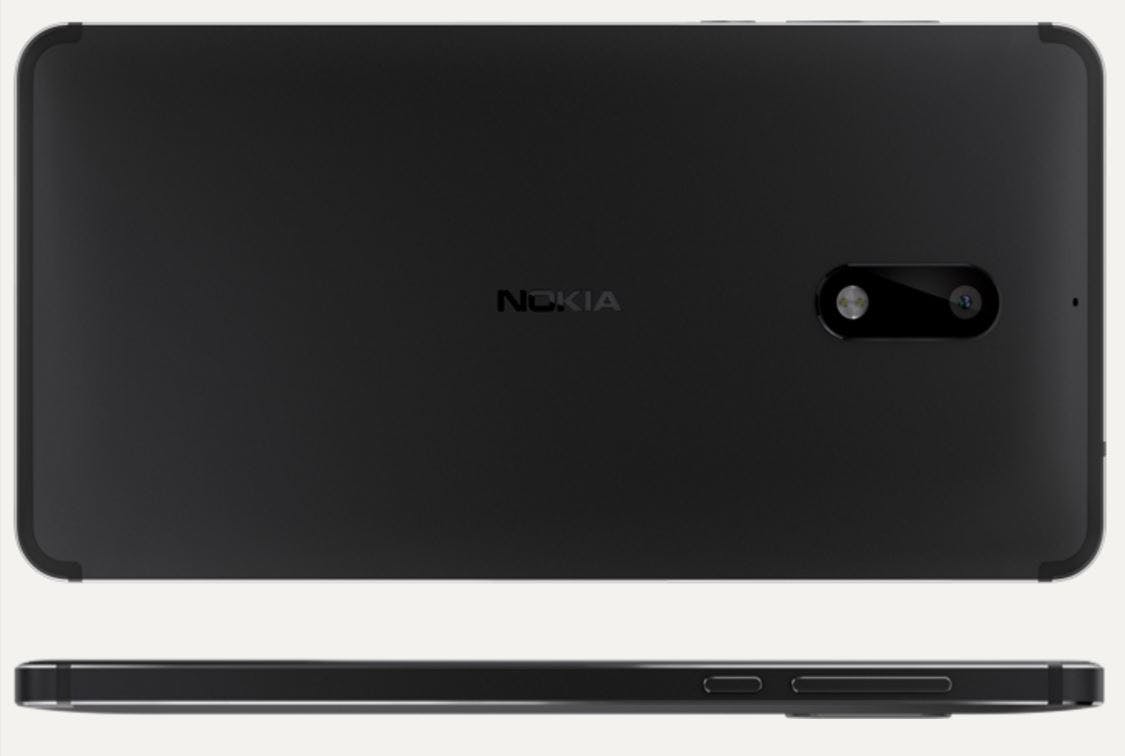 It comes with 3GB of RAM and 32GB of storage, which can expand to 128GB via a microSD card. A hefty 3,000 mAh battery sits under the hood, but no word on run time just yet. Oh, and it’s got a headphone jack and fingerprint sensor.

Nokia made a name for itself when it comes to producing quality cameras back when it was struggling to sell its mostly excellent Windows devices. The 6 model will try to replicate previous success with an f/2.0 16-megapixel snapper on the back and 8-megapixel selfie lens on the front.

The company is touting its ‘dual amplifier’ speakers, which it claims will be 6 decibels louder than normal speakers.

The Nokia 5 is very similar to the 6 with only a few notable differences. The more compact 5 comes with a slightly smaller and lower resolution (1280 x 720) 5.2-inch display and only 2GB of RAM.

While it also supports 128Gb of microSD card storage, it will ship with only 16GB pre-installed. Its 13-megapixel rear camera appears slightly less powerful than the one on the Nokia 6, at least on paper. 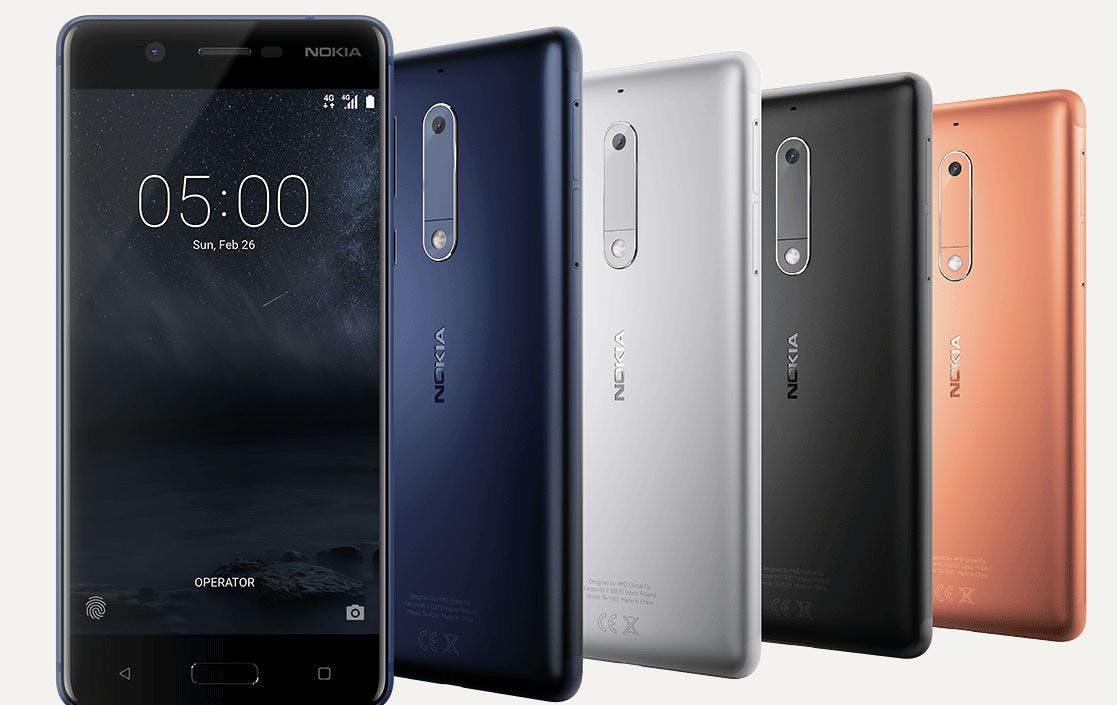 The rest is about the same. The nearly identical-looking devices run on the latest Android OS, are powered by a mid-tier Qualcomm 430 processor, sport a fingerprint sensor, and should get through a day on a single charge (especially the Nokia 5 with its lower res screen) with their 3,000 mAh batteries.

In true Nokia fashion, the low-price Nokia 5 is made of a single piece of aluminum, and its screen is coated in Gorilla Glass.

For those on a tight budget, there is the Nougat-powered Nokia 3, which follows the design language of its larger siblings. 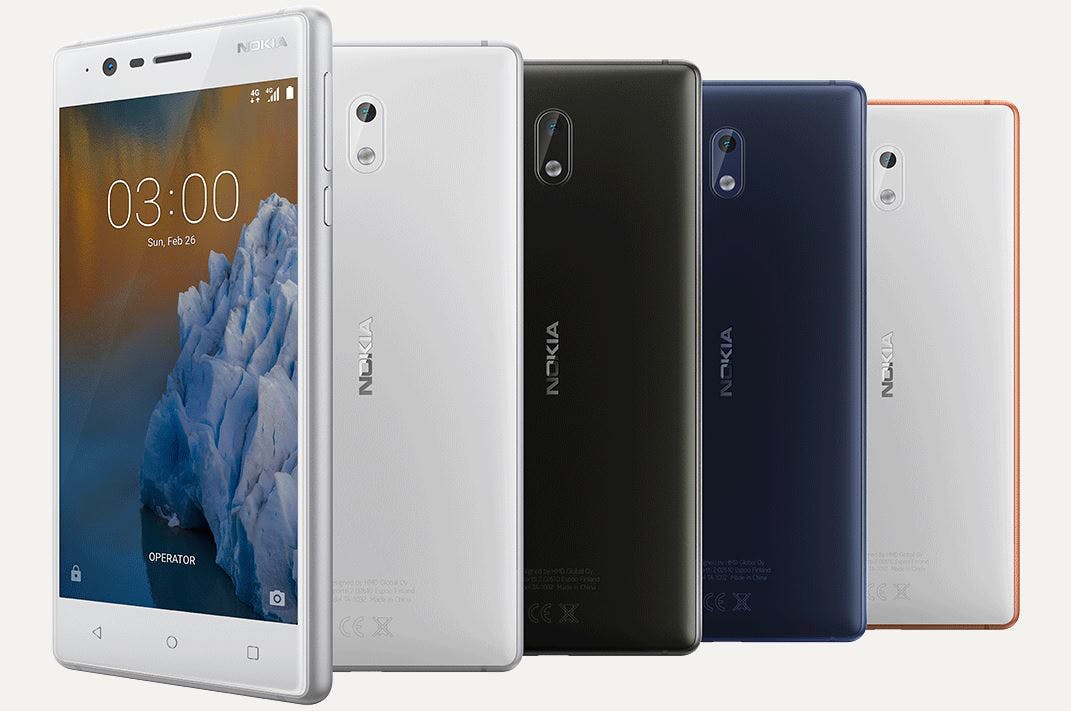 However, unlike the 5 or 6, the 3 is made of an aluminum core and polycarbonate shell, a material the Nokia name has a lot of experience with. It features a 5-inch 720p display, 2GB of RAM, MediaTek 6737 chipset, 16GB storage up to 128GB via a microSD card, and 8-megapixel front and rear-facing cameras.

The rectangular device is powered by a slightly smaller 2650 mAh battery and does not include a fingerprint sensor.

The 3 model will cost just €139, or just under $150, and should become available alongside the others.

Nokia will launch all three devices sometime this spring, with different countries receiving different release dates and specs. Chances are, you’ll be able to purchase one sometime this year. HMD claims it will sell its new phones in more than 120 countries from more than 500 partners, according to CNET.

HDM seems to have done a good job staying true to the Nokia name by focusing on durability, camera quality, and value.

We’ll only have to wait a few more months to find out if these new devices give us the same feeling as the legendary ones they follow. Until then, HMD will let you register your interest in each of the phones on its site today.