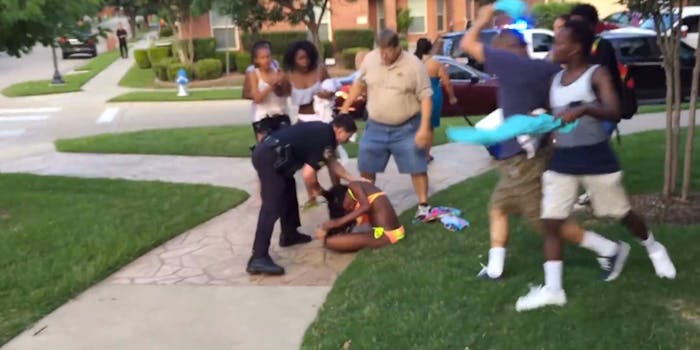 A jury found there was not enough evidence to indict.

A grand jury declined to indict Eric Casebolt, a former police officer from McKinney, Texas, who came under fire for his role in breaking up a pool party during the summer of 2015.

In the viral video, Casebolt, who is white, is seen pointing his gun at a group of unarmed teens while pinning a black teenaged girl to the ground. Following the incident, Casebolt was put on administrative leave.

“We’re glad that they system worked in his favor in this case,” Casebolt’s attorney, Tom Mills, told the Dallas Morning News.

The viral video was uploaded to YouTube by Brandon Brooks, a white teen who was also present at the party.

“A situation between a mom and a girl broke out and when the cops showed up everyone ran, including the people who didn’t do anything,” Brooks said in the video’s description. “So the cops just started putting everyone on the ground and in handcuffs for no reason. This kind of force is uncalled for especially on children and innocent bystanders.”

The portion of the video in question comes at the three-minute mark, when Casebolt demands a half-naked, 15-year-old girl to get “on her face” before pinning her to the ground with his knees and later arresting her. When a group of teenaged boys attempts to help her, Casebolt draws his gun on them.

According to DFW’s CBS Local, the grand jury determined there wasn’t enough evidence to bring criminal charges against Casebolt.

McKinney police will hold a community forum about the incident and Casebolt’s non-indictment on June 27 to “foster dialogue between residents and the local law enforcement community.”

“We want to build and maintain relationships and trust between our police department and the diverse communities in McKinney, Through this forum, we aim to establish another line of communication with citizens to hear directly what they would like to see from their police department,” McKinney Police Chief Greg Conley says in the statement. “By having citizens working in cooperation with police, we can begin to solve problems in our community.”