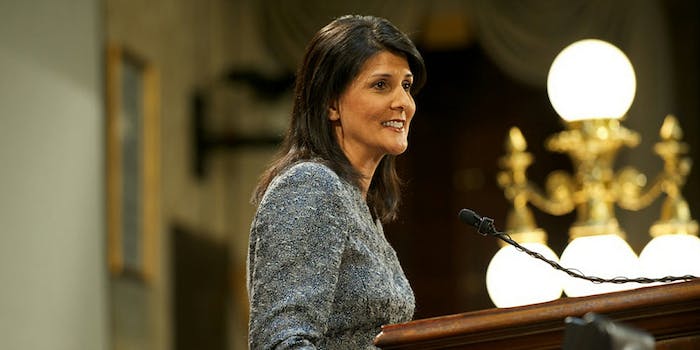 They were invited to a 'reception to thank you for your friendship to the United States.'

U.N. Ambassador Nikki Haley threatened to take down the names of countries that voted in the United Nations General Assembly to denounce President Donald Trump’s recognition of Jerusalem as Israel’s capital.

But the countries that voted against the resolution—they get to come to a “friendship” party.

Earlier this week the U.N. voted overwhelmingly to rebuke the Trump administration for its decision to move the American embassy in Israel to Jerusalem, but the eight countries who voted to stand by the U.S. move (and the countries that skipped the vote or abstained) were invited to a “reception to thank you for your friendship to the United States.”

#US ambo Nikki Haley invites the 64 countries who voted ‘no’, abstained or didn’t show up for #UNGA #Jerusalem resolution to “friendship” party. pic.twitter.com/ebMw5KnNYE

Haley threatened that the United States would be “taking names” of countries who voted in favor of the resolution before the vote took place.

“At the UN we’re always asked to do more & give more. So, when we make a decision, at the will of the American ppl, abt where to locate OUR embassy, we don’t expect those we’ve helped to target us,” she wrote on Twitter.

Trump followed suit, by declaring at a recent cabinet meeting that the United States would cut off aid to countries that voted for the resolution.

“Well, we’re watching those votes,” he added. “Let them vote against us; we’ll save a lot. We don’t care.”

Ultimately, 128 countries in the U.N. voted to declare Trump’s decision to move the American embassy to Jerusalem “null and void.”