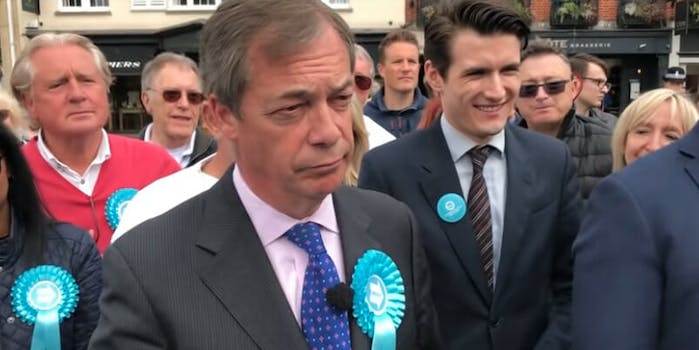 There's more than one way to duck a milkshake.

As milkshake-a-conservative-mania grips the U.K., supporters of the Brexit Party are disputing reports that leader Nigel Farage hid on a bus Wednesday afternoon to avoid the thick drinks being thrown at him.

The incident reportedly happened when Farage was campaigning in the English town of Rochester on the eve of the European parliamentary elections. Journalists reported that Farage refused to leave his Brexit bus after police warned him that balaclava-clad milkshake assassins were spotted in the surrounding crowd.

“There are a couple of guys standing over there with milkshakes, they were going to throw them over him,” Farage’s driver reportedly told local publication Kent Live. “But the police are there, we’ve spotted them and now Nigel isn’t getting off the bus.”

When he eventually did leave the bus, Farage stood cautiously by the door despite having walked the streets of other nearby towns on other stops to meet the public.

The story quickly went viral online, carried by several major national newspapers thirsty for the clicks that another milkshake story might bring.

As a result of the phenomenon, right-wing social media personalities and politicians have been the target of milkshake attacks in recent weeks, in which a protestor throws the cold beverage at their victim.

As well as Farage himself, far right agitator Tommy Robinson and UKIP candidate Carl Benjamin, perhaps better known by his online persona Sargon of Akkad, have both been milkshaked.

In a lengthy Twitter thread, Kassam blasted the media’s version of events. The media didn’t interview the bus driver at all, he said, and would-be protestors turned out to be three lads drinking frappuccinos “who were quite nice” and “engaged in debate.”

Kassam even noted that Farage had “bravely” walked “between a McDonalds and a Burger King” at an earlier campaign stop—unafraid that these are the very fast food outlets which sell various flavors of the controversial milk-based beverage.

He then went to hint that the news story might actually be a smear ploy by the establishment against Farage on the eve of the election, reasoning that The Sun’s political editor—whose publication was one of the first to run the story—is the son of a liberal Democrat politician.

It’s exactly this take that his outlet ran Wednesday afternoon, protesting that the U.K.’s “anti-Brexit press” had gone into “fake news overdrive.”

Brexit Party’s Dan Jukes also dismissed the story as “fake news.” He even issued pictures, supposedly taken at the time, where Farage can be seen standing by the bus doors laughing with supporters.

Here is Nigel off the bus in the same location @DailyMirror pic.twitter.com/eCyy3fInmB