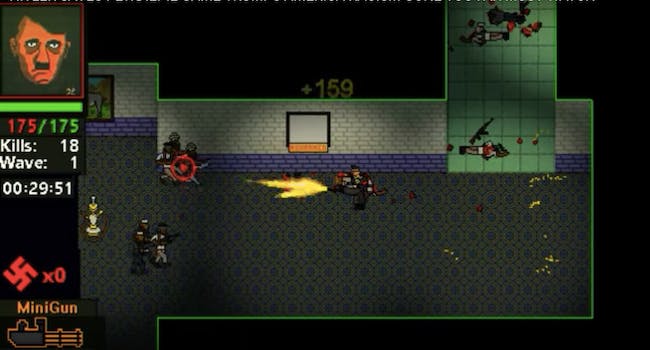 It's brought to you by the man best associated with the deadly Charlottesville rally.

If you thought 2018 couldn’t get more horrifying, you’d be incorrect. I hope you’re still on a good election high because it’s about to get a little dark.

Christopher Cantwell, the white nationalist best known as the face of the 2017 far-right Charlottesville rallies, has released Angry Goy II, a new video game — and it’s just as bad as you think. The game, which was posted on Cantwell’s blog, is about shooting down minorities, journalists, and Democrats. Per the description on the site, “Left-wing terrorists have kidnapped the President! If he is not rescued, Western civilization will fall. Do you have what it takes, or are you a cuck?”

Levels of the game include the “Communist Headquarters” or the “Fake News Network,” making reference the many beliefs of far-right nationalists. The level I found footage of was the Communist HQ, which included enemies that yell things like  “I smoke weed,” “You’re a white male” and “I’m with her,” because you know, communists are huge fans of Hillary Clinton.

According to LGBTQ Nation, one of the levels is titled “LGBTQ+ Agenda HQ,” where players break into a gay nightclub and shoot gay men and trans people. Apparently, posters outside of the virtual nightclub also say “CHILDREN WELCOME,” which is a little on the nose, but I digress. This level feels horrifically reminiscent of the Pulse shooting in Orlando and if we’re being honest, we know that that’s no accident.

In addition to the regular game mode, there is a survival game mode that takes place in Charlottesville and has enemies from all the different levels. They have rabbis, gay men, men in turbans, Black men in baseball caps and jeans, etc. The gay men specifically shout things like “we’re here, we’re queer” and “I was born this way,” when they’re being shot at by the player.

Unfortunately, this is not the first game like this — not by a long shot. Nazis have been creating their own games for years, with titles Ethnic Cleansing and Muslim Massacre which, as you can imagine, are very violent against non-white people. In addition to that, some people add modifications to other games in order to make them more racist. In the space empire building game Stellaris, someone added a mod in order to make an entirely white space empire.

I’ve been reporting about these games for over a year and a half and I haven’t come to a specific conclusion on how we handle games, or even far-right media in general, that have horrific images. My first reaction is to, of course, be disgusted and terrified. But on the other hand, these games are extremely stupid. They’re poorly made, the writing in them is terrible. In some ways, I think if we allow ourselves to be terrified by them, we’re giving them too much credit.

If we review these games in terms of their efficacy as propaganda, I can’t imagine anyone being convinced. These games aren’t created to shift the minds of potential future alt-right people, they’re created for teens who think it’s funny to be offensive or for existing white nationalists who think mainstream gaming is getting too “politically correct.”

What we should perhaps be more focused on is the mainstream media that white nationalists do enjoy. In Red Dead Redemption 2, some gamers were seeking out and killing a “feminist” character who was advocating for women’s right to vote. Videos of players effectively torturing this character went viral online. Those clips were viewed around a million times and by extension, do way more for far-right propaganda.

Another example is the game AIDS Simulator, which was at one point, allowed on the PC gaming platform, Steam, because of their relaxed “anything goes” policy. “Welcome to Africa, you’ve got HIV! Now you’re mad and want to kill all Africans that gave you AIDS to get revenge,” the description used to read.

Eventually, the backlash was too great and Steam removed the game along with other offensive titles. If we continue to hold these major gaming companies accountable for the violence they perpetrate, we’ll take away the true power of alt-right media. We’ll relegate these Nazis to the crappy little games they make on their own.