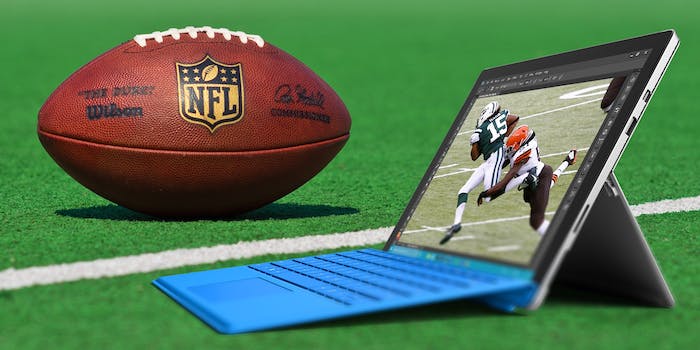 Microsoft’s Surface tablet is actually starting to make a difference in the NFL, for better or worse

The playbook has evolved.

Carolina Panthers head coach Ron Rivera is no fan of the Microsoft Surface.

It’s not that he hates the tablet personally, or is more of an iPad kind of guy. He thinks its presence is actively ruining the game he loves.

“As coaches, we work Monday through Saturday preparing for Sunday’s game. I work. I game plan. I put all of my thoughts together. I’m attacking you, I’m beating you,” he told the Associated Press earlier this year.

“And then, all of a sudden, they give you a tablet where you get to watch the play, rewind the play and see what happens on the play where you can say, ‘Oh my gosh, that’s what they’re doing to us?’ Now you can make an adjustment and change what you’re doing and have success. I don’t think that’s right.”

Now in its third year as a sideline staple, Microsoft’s tablet is evolving from an expensive piece of product placement to a legitimate tool in the hands of coaches and players. And while coaches like Rivera are trying to turn back the clock, others are looking for new ways to integrate the technology into their game plans.

Jeff Tran, the director of sports marketing and alliances at Microsoft, told the Daily Dot that Denver Broncos head coach Gary Kubiak, Rivera’s counterpart who got the best of him in Super Bowl 50, has happily adapted to the tablet.

“Microsoft technology continues to transform industries of all kinds from healthcare to education to small businesses by putting real time data and insights in people’s hands when they need it most,” he explained, stating the company’s approach to working with the NFL was no different.

The change the tablet brought to teams when the partnership between Microsoft and the NFL started in 2014 was at once simple and drastic. It gave coaches and players the ability to quickly view images from their previous possession to make adjustments for their next drive.

Prior to the Surface tablets, teams relied on printouts of pictures, loaded into thick binders and brought to the sidelines. The move to digital is much like making any office environment paperless, except this one consists of millionaires smashes their bodies into one another and then looking at pictures of the carnage afterward.

According to Tran, every team in the league uses the Sideline Viewing System, a Microsoft-built app designed specifically for helping teams access and examine photos during the game. But it’s moved from just a gameday gadget to an every day device for some.

“Many teams are also using the Surface devices in their organizations in more customized ways, from playbooks to front office productivity,” Tran said.

All of that information is heavily protected. “We take proprietary team data very seriously, and we’ve gone to great lengths to ensure each team’s Surface devices are only accessible by authenticated personnel or users,” Tran said, though he did not provide specifics details as to the security measures.

It’s not particularly surprising the tablet would find its way into the locker room and into the hands of team executives. There has been more resistance to things like technology and advanced statistics in football than in any other sport, but teams have slowly been coming around on the idea.

The Surface—ostensibly a consumer device—is a relatively easy sell by comparison to other integrations that may seem gimmicky or require considerably more technical know-how. Even the oldest of old school coaches likely has a smartphone, so the interface of a tablet is familiar.

Though that’s not to say the Surface has been entirely well-received. Other than the football itself, Microsoft’s tablet might be the most spiked object in the sport. Green Bay Packers quarterback Aaron Rodgers, Chicago Bears signal caller Jay Cutler, and notorious NFL bust Johnny Manziel have all done damage to the device.

And despite how recognizable the bright blue tablets are on the sidelines, it has regularly been referred to as an iPad. Fox commentators identified the device by the name of rival Apple’s tablet, as did Al Michaels in the 2015 season opener. Even the NFL Network’s own commentators called the Surface by the wrong name. And Jay Cutler, not satisfied with trashing the device physically, also called the Surface tablets “knockoff iPads.”

The tablet also came under fire during the 2015 AFC Championship game when the New England Patriots found themselves without a network connection and couldn’t utilize the devices to look at pictures from the previous possession.

The issue was no fault of the tablet, as Microsoft and the NFL confirmed to the Daily Dot shortly after the game, but rather a problem with the network infrastructure inside Sports Authority Field, where the game was hosted. But that didn’t stop a firestorm about the tablet’s role in the game.

Given the general rebuffing of anything that may make the game less about grit and grind and other concepts that the class of old school coaches lean upon, those types of troubles only bolster the resistance—all of which makes juxtaposition between Kubiak and Rivera all the more interesting.

Rivera became a cult hero in the world of statistics nerds for his propensity to gamble in situations many coaches would opt to play it safe, like trying to pick up a couple yards on fourth down to keep a drive alive rather than settling for a field goal. His tendency to take risks earned him the nickname Riverboat Ron, and more importantly helped transform the Panthers into a perennial contender.

Kubiak, on the other hand, has a history of being more risk averse. He’s historically been known to have a conservative style of play-calling, rarely pushing to create more opportunities for his offense.

That was only exacerbated last year when his quarterback options consisted of an inaccurate, inconsistent, and regrettably tattooed Brock Osweiler and a noodle-armed Peyton Manning who, among other lingering injuries, was unable to feel his fingers—a less than ideal ailment for a person tasked with throwing a football to have.

Based on their decision making during games, one would imagine Rivera would be the coach looking at every opportunity to gain an advantage while Kubiak would be apprehensive about it.

Kubiak’s style of coaching is considered to be on its way out by the many analysts who increasingly embrace statistical models to evaluate success, associated with a regressive mindset that rejects the cold hard facts found in numbers. Though his Panthers lost that game, Rivera’s smart risk taking is likely the way of the future for the NFL.

So it’s odd that Rivera, considered to be on the cutting edge when it comes to decision making, is so fearful of technology while Kubiak is embracing it.

The Panthers head coach likely won’t be thrilled about changes coming to the Surface tablets the team will rely upon. Heading into the 2016 NFL season, Microsoft is swapping out the Surface Pro 3 for the new Surface Pro 4, which sports a bigger, brighter display and lighter, thinner frame.

The device has been ruggedized, a necessity for teams that play in the elements and to protect the tablet from further abuse from frustrated players.

The biggest impact, though, will come with the improved Sideline Viewing System app. Coaches and players will be able to annotate the on-screen images using the Surface tablet’s stylus using a whiteboard feature. Notes and markups can be saved by user profile and shared to any user of the device, and coaches will be able to project the annotated images onto a big screen in the locker rooms during halftime.

The biggest change the tablets will bring is yet to come. The NFL started testing video replays on the device, moving beyond the still images that it currently displays. It would mark the biggest advance for in-game adjustments, introducing something that the old paper and binder method couldn’t offer, lest teams print out a flipbook.

The league has been experimenting with allowing replays on the tablets during the preseason and during the Pro Bowl, but the NFL Competition Committee has asked for more time to examine its impact before it approves the feature for use during non-exhibition games.

“We are pleased that our technology has improved the game enough that coaches and the NFL Competition Committee are exploring additional implementations,” Tran said, noting that Microsoft has worked closely with the league and its partners to make sure the technology is ready should the NFL decide to approve it.

“We’re always trying to improve the game through technology and will continue to do so but it is up to the NFL to decide what is best for the game when it comes to the implementation of our technology,” Tran said.

In the NFL, technology isn’t going away, but Ron Rivera’s stance toward it is. The coach believes that games are won and lost during the week, while teams practice and gameplan. If he wants to make a trip back to the Super Bowl, he may want to dedicate some time between Monday and Saturday for some sessions with the Microsoft Answer Desk.