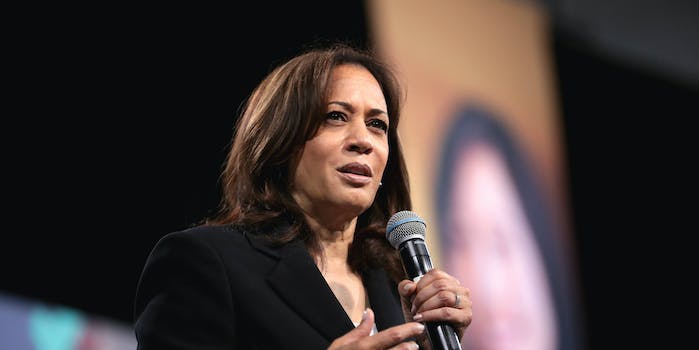 Yesterday, Newsweek published an essay arguing that Sen. Kamala Harris (D-Calif.) can’t be vice president if her parents weren’t permanent residents of the United States at the time of her birth—in California.

And for this, the outlet has been overwhelmingly and rightfully criticized for igniting another racist birtherism argument about a Black person seeking one of the highest offices in the land.

To make this argument, essay author John Eastman, a law professor and senior fellow at a conservative think tank, cavalierly brushes aside the Constitution and more than a century of jurisprudence.

The 14th Amendment states, “all persons born or naturalized in the US, and subject to jurisdiction thereof, are citizens of the US and of the state wherein they reside.” Additionally, the U.S. Supreme Court, in the 1898 case U.S. v. Wong Kim Ark, held that a U.S.-born child of non-citizen immigrants is a natural-born citizen.

Birthright citizenship is considered 100% settled by pretty much everyone except him (and occasionally President Donald Trump).

As soon as Eastman’s essay hit the internet, the comparisons to the racist birtherism claims about President Barack Obama began. (The argument about Obama were equally deficient.)

“And John C. Eastman outs himself as the first RACIST BIRTHER bullshit artist… SHAME ON @Newsweek to become the first GARBAGE media outlet to give support to these RACIST arguments…” tweeted one.

The criticisms were so severe that Newsweek published an editor’s note complaining that the essay isn’t racist birtherism, no matter what everyone thinks. They even added a link to it on Eastman’s essay.

In there essay explaining the essay, Newsweek wrote, “His essay has no connection whatsoever to so-called “birther-ism,” the racist 2008 conspiracy theory aimed at delegitimizing then-candidate Barack Obama by claiming, baselessly, that he was born not in Hawaii but in Kenya. We share our readers’ revulsion at those vile lies.”

Some noted that Newsweek neglected to mention that Eastman, a frequent guest on the Ingraham Angle, actually ran in the 2010 California Attorney General’s race. He lost in the Republican primary and Harris went on to win the general election.

He also has a Twitter history that includes laughing at a racist Pocahontas joke about Sen. Elizabeth Warren (D-Mass.), being chummy with his pal Alan Dershowitz (who’s been implicated in the Jeffrey Epstein case), and rejoicing over being called a “Claremonster … who has [Trump’s] back.”

“Nice try. Even if column is about an arcane 14th Amendment legal debate, you never explain why the ‘debate’ is in context of Harris,” tweeted Harvard University professor Juliette Kayyem. “The conclusion about her eligibility is ‘it depends.’ There are a lot of arcane legal debates. Why this one? Why now? Just say you got played.”

Harris has not commented on the second-wave birtherism Eastman and Newsweek have attempted to ignite.