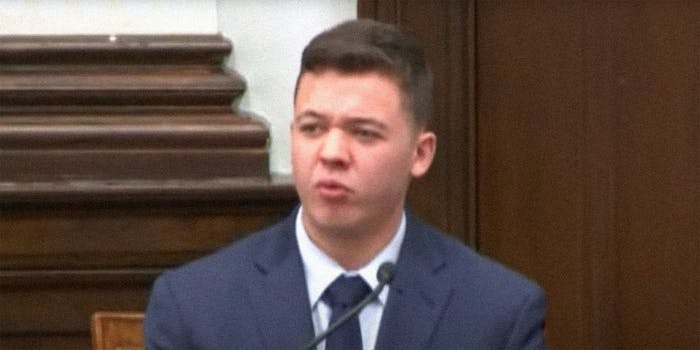 The ratio is strong.

The New York Times is getting taken to the internet woodshed over a tweet about Kyle Rittenhouse. Rittenhouse is currently on trial for killing two and wounding a third during protests over the police shooting of Jacob Blake. Rittenhouse is pleading not guilty by reason of self-defense.

Today, the Times published a brief profile of the accused teen killer. Its tweet and the article have been resoundingly panned.

“Kyle Rittenhouse, who has idolized law enforcement since he was young, arrived in Kenosha on Aug. 25, 2020, with at least one mission: to play the role of police officer and medic,” the Times’ tweet of the article reads. “The night would end with him fatally shooting two men and wounding another.”

Twitter users jumped on it. They felt the Times’ was much too sympathetic in its description of the now-18-year-old who crossed state lines with an illegally acquired AR-15 to play cop during civil rights protests over police gunning down a Black man. (Blake was shot seven times in the back. He survived, but was paralyzed.)

More than one commenter opined that it could’ve been written by Rittenhouse’s legal team.

“Honestly thought this was an op-ed by Rittenhouse’s defense attorney, before clicking on it to find out it is hard-‘news’ article written by @nytimes ‘journalists,’” economist David Rothschild commented on the Times’ tweet.

Numerous people claimed they were canceling their subscription to the Times as a result.

The general vibe in comments was that the Times grossly mischaracterized the narrative. One person accused the outlet of “lionizing a predator.”

“My kid wanted to be a medic for Halloween but I couldn’t find him an AR-15 in time,” comedian Maria Bartholdi tweeted.

As the blowback intensified, the tweet became a meme.

“NYT, circa 1945: ‘Adolf Hitler, who has idolized artists since he was young, arrived in Berlin in 1913, with at least one mission: to better his country. The war would end with him fatally gassing numerous men and wounding others,’” @MooseMustache tweeted mockingly.