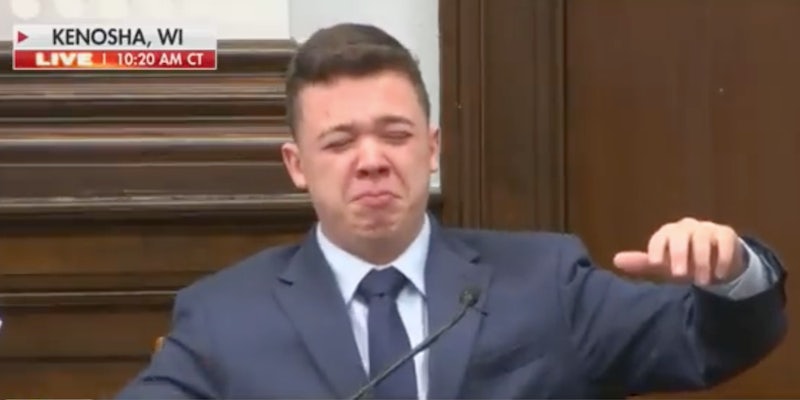 Twitter erupts into debate after Rittenhouse begins crying at trial

While some saw the emotional display as legitimate, others argued that the defendant had fake cried.

Twitter erupted into widespread debate on Wednesday after Kyle Rittenhouse began crying during his trial.

Rittenhouse, who shot and killed two people and injured a third at a protest in Wisconsin last year, appeared to break into tears after recalling the fatal incident on the witness stand.

The moment immediately became a political football, with users both opposed and supportive of Rittenhouse weighing in.

Many accused Rittenhouse of expressing fake emotions, arguing that no actual tears were present. Some images do show Rittenhouse tearing up.

Others accused the defendant of looking over at the jury in an attempt to gauge whether his actions were being viewed as sympathetic.

“I love how he tried to sneak a look a the jury after he ‘broke down,'” @Sheckmastaflex said.

Numerous comparisons were made to Brett Kavanuagh, who likewise made an emotional display while speaking before the Senate Judiciary Committee in 2018.

“Did he attend the Brett KavaNO school of acting?” @dvillella quipped.

Several references were also made to pictures of Rittenhouse posing with others prior to his trial while wearing a T-shirt that read “free as fuck.”

But not everyone felt that Rittenhouse’s breakdown had been fabricated. Other users suggested that the defendant was being genuine and should be cleared of all charges.

“So awful. This poor young man,” @freedomfirst585 said. “End this farce now so this young man can heal and have a peaceful life.”

Others used the moment to attack the media and defend former President Donald Trump.

“This kid didn’t deserve this, this is heartbreaking to watch. I hope he sues every rotten media hack that tried to paint a picture of him that wasn’t true,” @CutshawTj said. “What has happened to us? Trump was right when he told us that Fake News is the true enemy of the people.”

The judge in the case went on to call for a 10-minute break in order to allow Rittenhouse to compose himself.

Rittenhouse, who was 17 at the time of the shooting, has been charged with two counts of homicide, one count of attempted homicide, recklessly endangering safety, and illegal possession of a dangerous weapon by a person under 18.