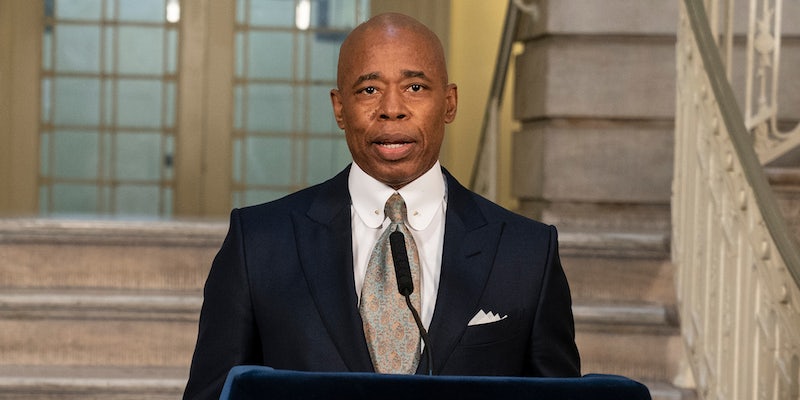 The previous plan had a much larger reach.

On Monday, New York City Mayor Eric Adams unveiled a new plan to provide free internet to as many as 300,000 New Yorkers, an effort to improve high-speed internet in the city’s public housing units. Adams said the plan could “change the life of a New Yorker.”

But it covers fewer New Yorkers than a previous iteration Adams scrapped earlier this year.

The new plan, called Big Apple Connect, will cost the city just under $30 per household per month, according to officials. The Adams’ administration pegged two of the city’s cable giants—Charter Communications and Altice—to provide the service, despite the concerns of city council members over lawsuits and audits against the companies for failure to provide previously promised services.

Brett Sikoff, executive director of the city’s newly created Office of Technology and Innovation, told lawmakers on Monday there was an “immediate need for services” and that using existing cable infrastructure and companies would help “stop the bleeding.”

But the plan falls flat when compared to a 2020 plan introduced by then-Mayor Bill de Blasio. The “Internet Master Plan” promised to use a mix of larger internet companies as well as smaller providers to reach 1.5 million New Yorkers, vastly more than Adams’ estimated 300,000.

But the Adams administration has let that money sit while they reevaluate the plan, Sikoff told lawmakers on Monday.

New York City Council Technology Chair Jennifer Gutiérrez did not respond to a request for comment, but told Gothamist that its “unaceptable that [the city] does not have a comprehensive roadmap toward connecting more New Yorkers to the internet” and that while she does “respect the challenges of re-evaluating a plan from a previous administration” the city needs a robust roadmap to free or subsidized internet.

The program will have a three-year contract and it’s unclear what will become of the new program once that ends.