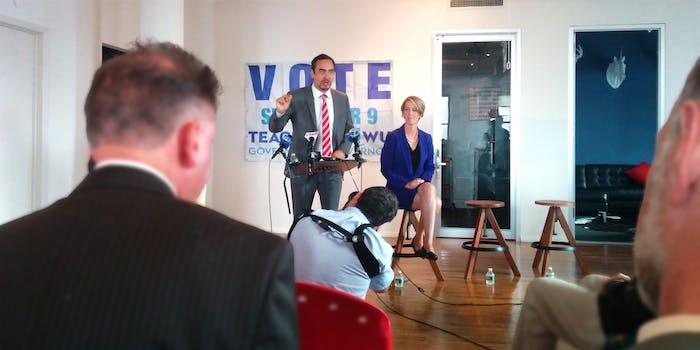 Reddit cofounder Alexis Ohanian says Tim Wu helped him out a decade ago.

As if there was any doubt that he was the Internet’s choice for Lieutenant Governor of New York, candidate Tim Wu received Reddit cofounder Alexis Ohanian’s nomination at a meeting in New York City on Monday.

Wu, a lawyer, writer, and former Federal Trade Commission advisor with little experience in state politics, is perhaps most famous for coining the phrase “net neutrality,” the concept that Internet providers can’t charge more for their customers to access certain websites at top speed.

Ohanian also endorsed Wu’s running mate for the actual governorship, Zephyr Teachout, though unlike Wu, she doesn’t have much of a chance to hold the office next year. Because of the structure of New York state politics, even though candidates usually run as a governor-lieutenant governor team, that’s essentially for show: Primary elections nominate those two positions separately.

Polls show that incumbent governor Andrew Cuomo is a near lock to hold his seat, but with current lieutenant Bob Duffy stepping down, that job is more open. The New York Times has also endorsed Wu, but declined to support any gubernatorial candidate.

In a speech before a small crowd in Meetup’s offices in Manhattan’s NoHo neighborhood, Ohanian, a longtime supporter of net neutrality, called Wu “one of the O.G.s of the open Internet,” and said Wu’s work was essential to his site’s success. He reflected upon meeting Wu as a young entrepreneur fresh out of college.

“He’s a guy who I can talk really heady policy stuff with, and then get a beer with and talk about nothing with,” Ohanian told the Daily Dot.

Though he’d donated to previous campaigns, and was a key player in an unsuccessful bid to oust congressman Lamar Smith (R-Texas) after Smith tried to pass the controversial Stop Online Piracy Act (SOPA), Ohanian told the Daily Dot this was his first formal political endorsement.

In his short speech touting his technology plan, Wu called for New York “to be a leader, not a follower” in technology, and cited several ways the state government could block the vastly unpopular Comcast–Time Warner merger. That merger would raise already-high prices for New Yorkers, he said, making it an issue that’s “affecting the middle class and poor people.”