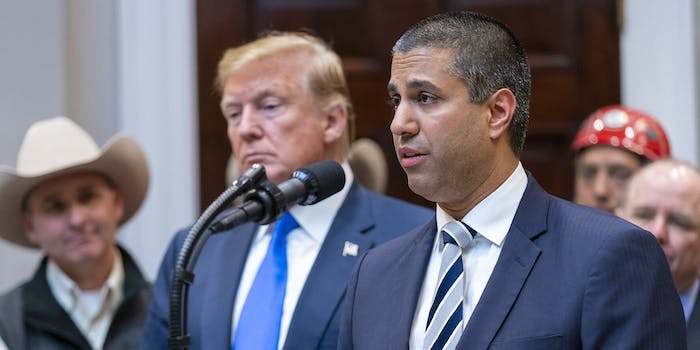 A new study found that net neutrality rules being in place—and then being repealed—had no effect on broadband investment, cutting into an argument Federal Communications Commission (FCC) Chairman Ajit Pai pushed ahead of the agency’s 2017 repeal.

A study from George Washington University’s Institute of Public Policy released earlier this week looked at quarterly SEC data from 2009 to 2018 and capital expenditures among telecommunications companies. It found that “were no impacts on telecommunication industry investment (as measured by new capital expenditures incurred) from the [net neutrality] policy changes.”

“Neither the 2010 or 2015 US [net neutrality] rule changes… had any causal impact on telecommunications investment,” the study reads.

Motherboard reported on the study on Friday.

“We don’t expect this study to kill the ISPs’ zombie lies about net neutrality and investment,” Derek Turner, a research director at Free Press, told the news outlet. “The telecom companies and their defenders in Congress have long operated unmoored from reality, and no smoking gun is going to change that, certainly not one they’ll never bother to read and consider fairly.”

In the lead up to the FCC’s 2017 repeal, Pai argued that net neutrality was stifling investment among broadband providers. At the time, his reasoning was pushed back on by pro-net neutrality groups.