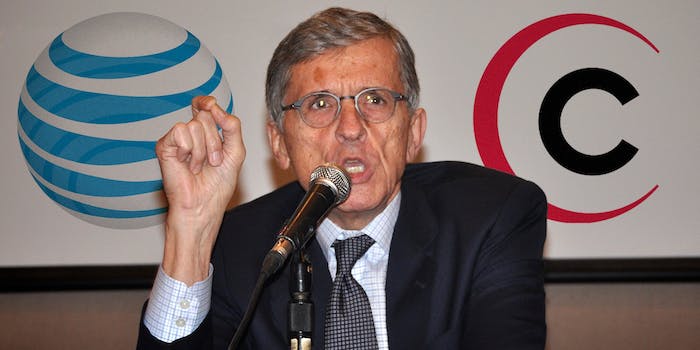 Is this big court case going to kill net neutrality?

This is "the end of the beginning" of the net neutrality debate.

On Friday, three judges will hear arguments that will determine the fate of government-enforced net neutrality.

The case, United States Telecom Association v. FCC, is the first major fallout from the Federal Communication Commission’s decision to reclassify Internet service providers under Title II of the Communication Act. In doing so, the FCC has far more power to regulate how ISPs treat the Internet traffic they deliver to customers.

Under those new rules, ISPs can’t choose which customers get full-speed service—for example, Comcast is not allowed to slow down Netflix while keeping its Xfinity services fast—block access to websites or online services entirely, or charge Internet companies to deliver their services to customers at a higher rate.

“This is the end of the beginning.”

ISPs, on the other hand, want to keep the FCC from reclassifying their service, arguing it will stifle their business plans and hurt their bottom lines. AT&T, for example, recently claimed that it had to “shelve a bunch of stuff” due to the potential impact of Title II reclassification. ISPs are represented by USTelecom, an industry lobby group whose clients include most big Internet providers like including AT&T, Comcast, and Verizon. The FCC will argue that its net neutrality rules are crucial to maintaining the Internet’s vital ecosystem.

Each side will want to convince at least two of the three presiding judges that they’re in the right. “At the appellate court, particularly the D.C. Circuit, sometimes [oral arguments] can really influence or change judges’ minds,” Stuart Brotman, non-resident senior fellow at Center for Technology and Innovation at the Brookings Institute, told the Daily Dot in a phone interview.

But that doesn’t mean to expect surprises. This hearing has been a long time coming, and both sides have long shown their hands. AT&T had threatened to sue before the FCC even voted on the rules in February after a number of delays. A senior FCC official previously told the Daily Dot that the reason they repeatedly delayed the vote is because they wanted to make sure it would be able to withstand such a legal grilling. The FCC, for its part, published its 218-page legal defense back in September.

The issue is decidedly wonky—there’s a reason the FCC felt the need to take 218 pages to explain itself. Still, the judges are human. “These are very complex and dense arguments that are made by both sides, so it’s going to be very important for them to be simple to be able to get the judge to follow the arguments,” Brotman said.

Nevertheless, the pro-net neutrality lobby feels good this time around, and that this won’t be a repeat of a 2010 lawsuit, in which Verizon successfully sued the FCC over different net neutrality rules and had them thrown out. “We’re confident that the FCC’s ruling will stand up in court, because the agency chose the correct legal path this time around,” Tim Karr, Senior Director of Strategy at the Internet freedom group Free Press, told the Daily Dot. Free Press is testifying on behalf of the FCC.

One of USTelecom’s arguments is that the new net neutrality rules violate ISPs’ First Amendment rights to edit the Internet traffic going over their networks as a newspaper editor edits stories. But multiple previous rulings have found that ISPs do not function as editors, but instead as mere conduits of information, Karr said.

Another is that Title II was written long before the Internet existed as we know it. This is objectively true; the Communications Act was first passed in 1934, and amended to include the current version of Title II in 1996. “Judges weigh the law that’s before them,” Karr said, pointing out that ISPs are backing current congressional movements to undermine the FCC’s authority. “That should tell you, more than anything else, that they don’t have a lot of confidence in the law as it stands now,” he said.

However the judges respond—which will take months, and possibly until late in 2016—their decision can be appealed, and the case can bounce all the way to the Supreme Court. “This is the end of the beginning,” Brotman said.