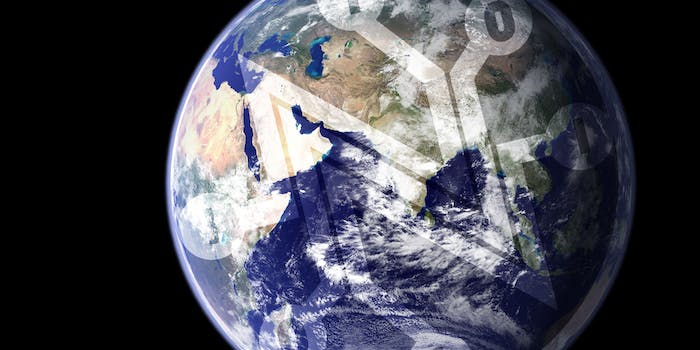 Only three countries have enshrined net neutrality into law.

If today’s Internet Slowdown Day protests actually lead to meaningful open Internet regulations in the United States, it would put this country in a surprisingly small club. As of early September 2014, only three countries have adopted net neutrality provisions, and none of them are international heavyweights likely to influence broader action on this issue.

Chile became the first country in the world to enshrine net neutrality into law at the beginning of this decade. Its legislature passed a series of bills in July 2010 amending the country’s General Telecommunications Law. One of these amendments banned Internet service providers from discriminating against certain data in transmission.

According to Canadian Internet rights group Open Media, Chile’s net neutrality provision, Bulletin Number 4915-19, states, “No [ISP] can block, interfere with, discriminate, hinder, nor restrict the right of any Internet user of using, send, receive, or offer any content, application, or legitimate service through the Internet, as well as any activity or legitimate use conducted through the Internet.”

The Netherlands followed Chile’s lead in June 2011, becoming the first European nation to pass net neutrality legislation. The Dutch parliament lent widespread support to the bill to prevent Dutch mobile and home Internet providers like KPN and T-Mobile from charging fees for prioritizing the delivery of certain content.

At the time, analysts saw reason to believe that other European countries might follow in the Netherlands’ footsteps. Jacques de Greling of the French bank Natixis told the New York Times, “I believe there will be pressure from consumers to make it clear what they are buying, whether it is the full Internet or Internet-light.”

The same Times story from June 2011 pointed out that many European Union politicians had voiced support for net neutrality, but had yet to legally ratify this support. Three years later, on April 3, 2014, the 28-member EU finally acted.

As part of a larger movement toward unifying its member states’ telecommunications policies, the European Parliament adopted an amendment stating that “traffic should be treated equally, without discrimination, restriction or interference, independent of the sender, receiver, type, content, device, service or application.”

In opposing the E.U. net neutrality provision, European network providers made an interesting argument: The ability to discriminate against certain types of content should be considered a matter of industrial policy. The most popular content creators that net neutrality aims to protect—Facebook, Ustream, YouTube, and so on—are based in the United States. Therefore, the European ISPs argue, if they want to make money and support industrial workforces at home, they need to enter into deals with these foreign companies.

“The only major players Europe has in the global digital economy are network operators and network equipment manufacturers,” Jens-Henrik Jeppesen, the Director of European Affairs at the Center for Democracy and Technology (CDT), told The Daily Dot. These companies, he says, argue that “policy makers need to support them and allow them to access new profit pools,” such as preferential content carriage agreements.

European ISPs, Jeppesen said, “are able to tap into a fairly widespread animosity among European policy makers [and] regulators against U.S. internet companies, notably Google.” He pointed to an article in the latest issue of the Economist entitled “Germany’s Goolephobia: Closing the circle.”

“Although Germans seem to love Google’s services,” the article explains, “the firm itself is seen as a digital glutton that intends to ingest everything: personal data, intellectual property, industry, even democracy.”

To pass the European Parliament, the package of legislation that included the net neutrality provision had to overcome these and other objections from the continent’s powerful and well-financed ISPs. Jeppesen explained that, in addition to net neutrality, the telecom companies fought tooth and nail to defeat companion legislation on transnational roaming plans, wireless spectrum control, and the question of whether the E.U. or its member states should regulate ISPs.

“Taken together, there is really nothing in the regulation that operators see as being to their advantage,” he said. “Their opposition to the [net neutrality] legislation is reinforced by these other issues.”

On the other hand, net neutrality activists in Europe, including the CDT, cheered what they saw as a strong step forward for open Internet policy. Jeppesen said that “advocates were fairly pleased with the Parliament vote, which included stronger non-discrimination language and stricter controls on specialized services than the original text.”

E.U. member states must review the new telecommunications policy before it takes effect, and it is at this final stage that the ISPs plan to make their last stand against net neutrality and a host of other issues.

“The telcos are lobbying hard to undo these changes in the Member States’ review of the legislation,” Jeppesen said. “It is likely that they will be at least partly successful.”

The European Commission expects the member states’ review to be complete by the end of 2014.

On April 22, Brazil joined its fellow South American nation Chile by codifying net neutrality into law. The 81-member Federal Senate of Brazil unanimously approved a bill to require equal transmission of content over the Internet. The bill, dubbed Marco Civil, received the support of Timothy Berners-Lee, inventor of the World Wide Web, who praised the legislature’s refusal to back down in the face of staunch opposition from Brazilian ISPs.

Net neutrality in Chile made the news again in May 2014, when the government agency in charge of regulating the country’s telecoms banned them from partnering with companies like Facebook to offer customers free access to their services.

Subtel, the Chilean regulator, issued a ruling saying that these deals were illegal under the country’s relatively new net neutrality law. By exempting data used by these apps from customers’ monthly bills—a practice called “zero rating”— the deals gave the apps a leg up over competing services whose creators could not strike similar partnerships.

Virgin Mobile landed in hot water for a similar proposal at the end of July. It announced a new custom plan that will exempt a handful of social networking apps like Facebook, Twitter, and Pinterest from monthly data limits. Virgin, a Sprint subsidiary, wasn’t even the first to offer such a plan. T-Mobile’s free music-streaming package, which similarly exempts apps (in this case, Pandora, iHeartRadio, and the like) from data caps, was the first direct threat to net neutrality from a wireless service plan option.

The Chilean regulatory decision may have seemed like a win for net neutrality in some corners, but to the more libertarian-minded groups that favor an unimpeded free market over a competitive but well-regulated one, the move was a disastrous one.

“The ruling validates the fears of many analysts that, while perhaps well-meaning, broad ex ante prohibitions are likely to lead to results that are harmful to consumers and to innovation,” warned the website Tech Policy Daily.

“The net effect,” the site said, will be “to widen Chile’s digital divide.”

On Sept. 15, the comment period for the Federal Communications Commission’s open Internet regulations will close. After that, Americans will wait to learn whether the agency plans to double down on its lax approach to net neutrality or push the United States toward membership in a small but admirable club.