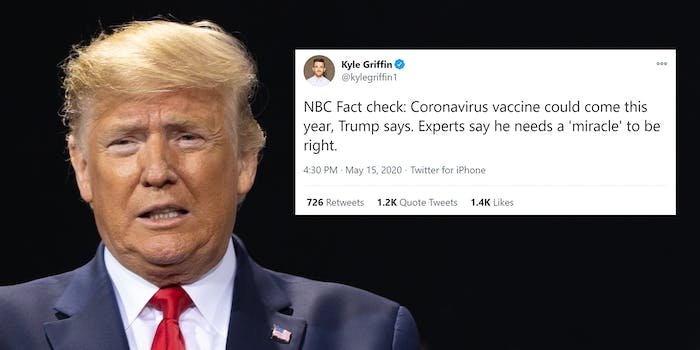 Being anti-Trump didn't make a vaccine come any faster or slower.

Back in May, NBC News fact-checked President Donald Trump’s claim that a coronavirus vaccine would be here by the end of the year. Now, it is getting called out as vaccinations began in the U.S. on Monday.

MSNBC producer Kyle Griffin tweeted that the vaccine would likely not be available in 2020 despite Trump’s claims. Now, Trump supporters, no fans of Griffin’s anti-Trump tweets, are revisiting that as COVID-19 vaccines roll out.

“NBC Fact check: Coronavirus vaccine could come this year, Trump says. Experts say he needs a ‘miracle’ to be right,” Griffin tweeted in May.

At the time, experts like CDC director Dr. Anthony Fauci did not expect a vaccine this year. In April, Fauci told USA Today that early 2021 would be more likely. NBC reported that experts were in agreement about this timeline.

Despite previous vaccination development precedent, the COVID-19 vaccine sped through approval processes. The Food and Drug Administration issued emergency approval for Pfizer’s vaccine on Friday. Pfizer is the first biotech company of several to produce a successful vaccine, which began announcing results in late November.

“And a miracle did happen, we had this president-when this worldwide pandemic happened. If it was another administration it would have taken several years, 95% effective rate is amazing. Thank Goodness 4 our amazing scientists + this administration,” another added.

“Narrator: he got the miracle,” one user posted.

Shipments of the Pfizer vaccine began over the weekend and healthcare workers in New York City received their first doses today. The Trump administration secured vaccines for 50 million Americans from the company.