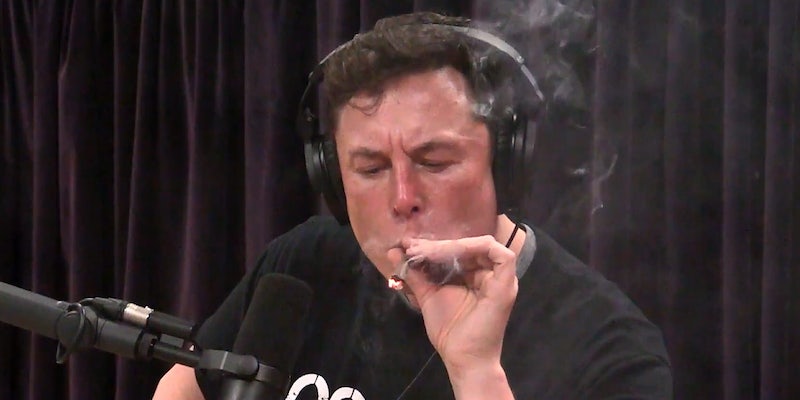 The appearance is already a meme.

Why did a rich man who wants to transport mankind to Mars and fix Los Angeles’ traffic issues with an underground tunnel even go on Joe Rogan’s podcast?

Earnest supporters who believe in his ideas have called Elon Musk the “real life Tony Stark,” but they may want to rethink their lionization after the 47-year-old celebrity billionaire smoked a blunt with Rogan on Thursday. The WTF moment, where a futurist risks his fortune by freaking out the shareholders in order to be cool, is already a meme.

It’s the latest in a series of head-turning, buttoned-down appearances from the Tesla and SpaceX CEO. Musk sat down with the comedian turned bro minister and part-time survivalist to discuss eccentric ideas while drinking whiskey. Then Rogan passed him a spliff.

At the end of the show, Rogan asked Musk for concluding thoughts. He was honest, possibly drunk and stoned: “I think people should be nicer to each other … And give more credit to others and don’t assume they’re mean until you know they’re actually mean … It’s easy to demonize people, you’re usually wrong about it. People are nicer than you think.”

Rogan, his fit and hulking frame hunched over the microphone, becomes a podcast icon with this coup of a sit-down. His gift is finding candid moments and getting his weird blend of celeb guests with grandiose delusions to speak as if by the campfire. Just listen to Rogan’s open-ended chat with Blink-182 rock star Tom DeLonge, which begins with Rogan saying “I love bullshit” and gets into DeLonge’s belief that he’s working with the government to normalize aliens to the public, and also that he thinks Mars was set ablaze by nuclear war.

For his part, Musk is facing a libel lawsuit from the Thai cave rescuer whom he called a pedophile, has made confusing public statements about making Tesla a private company as his employees leaked intel about the disorganized company culture, and recently spoke with unguarded candor to the New York Times. He made a 4/20 joke.

The internet reacted to Elon Musk smoking weed on camera with some great memes:

Ok Elon, here's our big moment. act like you've been here before. just a regular guy smoking weed with a friend. here we go. pic.twitter.com/5g5k7ZF7gb