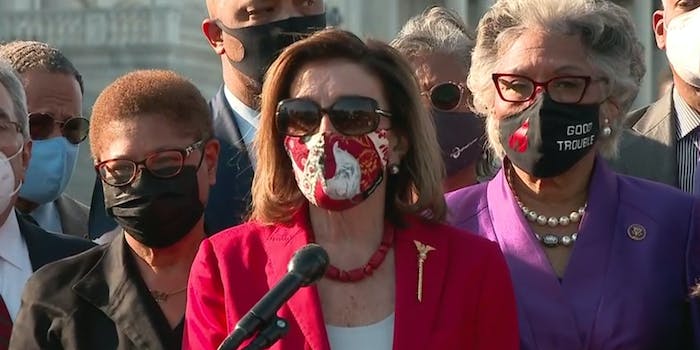 ‘Murder victims are not martyrs’: People are pissed after Pelosi ‘thanks’ George Floyd for being murdered

It is an utterly unfathomable turn of phrase.

While most of the country was breathing a sigh of relief in the wake of former Minneapolis police officer Derek Chauvin being convicted of the murder of George Floyd, House Speaker Nancy Pelosi (D-Calif.) was putting her foot in her mouth.

Pelosi, who donned a Kente-cloth stole in a widely criticized PR stunt after Floyd was killed, thanked him for being murdered, a bizarre choice of words for the crime, which saw Chauvin kneel on Floyd’s neck for nine minutes.

“So again, thank you George Floyd for sacrificing your life for justice,” Pelosi said in the aftermath of the verdict.

It was a choice of words almost no one could fathom, as making a sacrifice typically implies a choice, of which Floyd did not have. And he did not sacrifice his life for justice. That came on Tuesday, 11 months after he was killed, and wouldn’t have been needed if he wasn’t.

Online, people were aghast at the tone-deaf and abhorrent statement from the Democratic House leader.

“Because of you,” Pelosi added and because of “millions of people around the world who came out for justice, your name will always be synonymous.”

With justice, she probably meant to add.