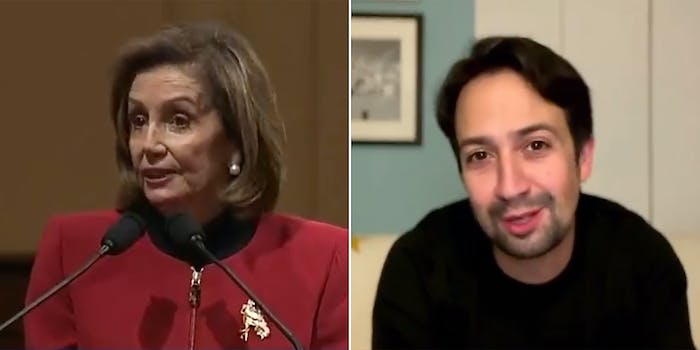 Nancy Pelosi’s cringe-inducing use of Hamilton at Jan. 6 event unites Americans… against her

'Maybe the QAnon Shaman had a point.'

Sen. Nancy Pelosi (D-Calif.) achieved the impossible on Thursday by bringing all Americans together. How did she manage to pull off this phenomenal feat? By commemorating the one-year anniversary of the Capitol riot with a song from the cast of the hit musical Hamilton.

While the public was busy sparring over the significance of Jan. 6—which saw Republicans spreading conspiracy theories to pass off the blame as Democrats made outlandish comparisons to 9/11 and Pearl Harbor—the D.C. establishment was busy shooting itself in the foot.

Pelosi presented to her fellow lawmakers a pre-recorded clip over Zoom of the Hamilton cast singing “Dear Theodosia,” along with a prepared statement from the musical’s star actor Lin-Manuel Miranda.

Unsurprisingly, social media reacted with shock at just how out-of-touch Pelosi and her cohorts appeared to be.

Countless criticisms began flooding platforms as users struggled to come to terms with the foreboding display.

Conservatives had a field day with the footage, viewing Pelosi’s social faux pas as evidence of the Democrat’s politicization of Jan. 6.

Others reacted to the song with memes that appeared to bemoan the current state of U.S. politics. Numerous references were also made to the embarrassingly cringe celebrity rendition of John Lennon’s “Imagine,” led by Hollywood actress Gal Gadot in 2020.

“Those Who Do Not Learn History Are Doomed To Repeat It,” one user wrote.

Yet many pointed to joke predictions that had seemingly foreseen such an event where the liberal obsession with Hamilton would go one step too far.

Even worse, an old tweet from January of last year suggested that a Democrat-led insurrection would have somehow incorporated Hamilton.

“A liberal insurrection would have looked different,” the user wrote. “We would have escorted the original Broadway cast of Hamilton into the galleries. They would softly sing ‘History Has It’s Eyes On You’ as members of the GOP spewed their lies.”

But the disdain wasn’t partisan. Progressives widely pushed back against Pelosi’s bizarre antics as well.

One user questioned why Americans couldn’t simply be given healthcare.

Some even joked that the QAnon Shaman, the Trump supporter who helped lead the Capitol riot, had been right about the government all along.

Either way, the one-year anniversary of Jan. 6 has made it abundantly clear that this nation may be in serious trouble.