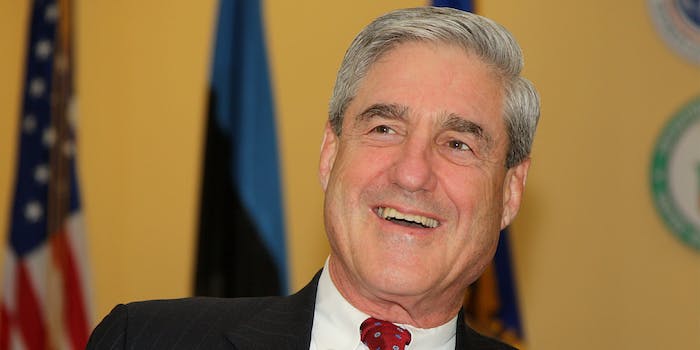 Liberals are jonesin’ for impeachment after Mueller questions leak

The questions—which focused on possible collusion as well as obstruction of justice—were swiftly dismissed by the president this morning.

So disgraceful that the questions concerning the Russian Witch Hunt were “leaked” to the media. No questions on Collusion. Oh, I see…you have a made up, phony crime, Collusion, that never existed, and an investigation begun with illegally leaked classified information. Nice!

But despite the president’s denial, those on the left saw it as a major step in what they hope will be the beginning of the end of the Trump presidency.

FUN FACT: When the @FBI or #SpecialProsecuter asks you a question…THEY already KNOW the answer :) https://t.co/cDS4rbTIlx

READ
BETWEEN
THE
LINES
😎 https://t.co/4pbYlJO0uT

Others who have been hot for the investigation ever since it was launched saw this as a brilliant negotiating tactic by Mueller, who has cornered the president by getting these questions out into the press.

1. MAJOR breaking news here from NYT: They have a list of DOZENS of questions Mueller wants to ask Trump. I believe there is NO WAY Mueller leaks this unless his team knows they're NOT going to sit down with Trump. I believe that GJ subpoena is coming. https://t.co/gOFSRNOpnI

2. While there have been negotiations (and I believe those broke down months ago, contrary to reports), I do not believe Mueller was THIS specific with Trump's lawyers. I do believe the leak comes from Mueller's team.

5. In my opinion the ONLY sensible scenario here is that Mueller knows he is NOT going to interview Trump, and he's going to subpoena him, and this? Turns on PUBLIC pressure big time AND allows reporters to LOOK for things. LOTS of hints in there.

8. As @maddow too is saying, and that's been my pick for by far most likely option, Mueller knows he's NOT going to sit with Trump, so he is allowing these to be out. Result: Trump freakout AND major hints being out in public. AND reporters can investigate.

Some on the left had more layered theories: If the leak didn’t come from Mueller and it wasn’t a masterstroke by the president’s team to get ahead of the investigation, then it was absolutely a botched gambit by Rudy Guiliani.

(Because, you know, the president can only mess things up, according to them.)

Rudy Giuliani has really nailed it in his efforts to wind down the Mueller probe. https://t.co/wc4ECuxlzD

The news was met with the most glee by Russia collusion tweetstorm brigade Twitter—prominently Louise Mensch and Seth Abramson—who saw this a clear indication Mueller was planning on indicting Trump for his “crimes” against the Republic.

(Or in Mensch’s case, indicting him again.)

It’s full of questions on collusion. No questions about money laundering because you’re already indicted for RICO under @comey cc @RepAdamSchiff https://t.co/7FbJZlfQYO

Abramson went so far as to say that this was a clear sign that Mueller could recommend felony charges against Trump, which could bring about an impeachment referral from the Justice Department.

Mueller is asking the thought-oriented questions not to inculpate/exculpate Trump but to learn how he'll need to frame his documentary/testimonial evidence to pierce Trump's—now nailed-down—lies. Action-oriented questions are the ones that could lead to felony charges for lying.

2/ Questions about Trump's thoughts are intended to lock him into a narrative he can't stray from later on, allowing Mueller to frame his evidence (going forward) accordingly. Questions about actions are straight-up traps for the sort of man—Trump—who'd definitely lie to the FBI.

Trump, for is part, is currently still a free man and also the president.