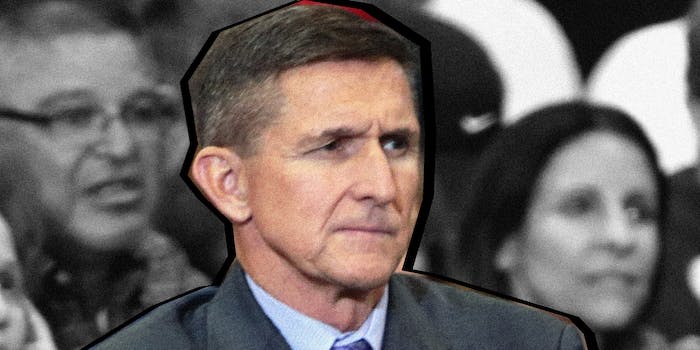 The former national security adviser is expected to plead guilty.

Special Counsel Robert Mueller‘s team has charged former National Security Adviser Michael Flynn with one count of lying to the FBI. He pleaded guilty to the charge and agreed to cooperate with the government as part of the plea deal, according to reports.

Flynn is the fourth Trump associate charged in recent months by the special counsel’s office, which is leading the Justice Department investigation into Russian interference in the 2016 election and possible ties between President Donald Trump‘s campaign and the country.

In October, Mueller’s team handed down charges to former Trump campaign chairman Paul Manafort and his associate Rick Gates on money laundering charges—among several others—and former campaign foreign policy adviser George Papadopolous, who was charged with lying to the Federal Bureau of Investigation about his interactions with people who had ties to the Russian government.

Flynn was charged with one count of making false statements, according to court documents.

Flynn falsely stated that he did not ask Russia’s former ambassador to the United States, Sergey Kislyak, to refrain from “escalating the situation in response to sanctions that the United States had imposed against Russia” on Dec. 29, 2016, the documents say.

Trump asked for Flynn to resign in February after reports revealed that he lied to Vice President Mike Pence about the nature of his conversation with Kislyak.

Flynn also falsely told FBI agents that he did not ask the ambassador to delay a vote on or defeat a United Nations Security Council resolution, according to court documents.

The New York Times reports that Flynn’s guilty plea is a sign that he is cooperating with Mueller’s team as the investigation continues to grow.

Last month, it was reported that Mueller’s team had enough evidence to charge Flynn and his son as part of the probe.

Trump fired Comey less than two months later, an extraordinary move that is now reportedly the subject of Mueller’s probe into the president’s potential obstruction of justice.