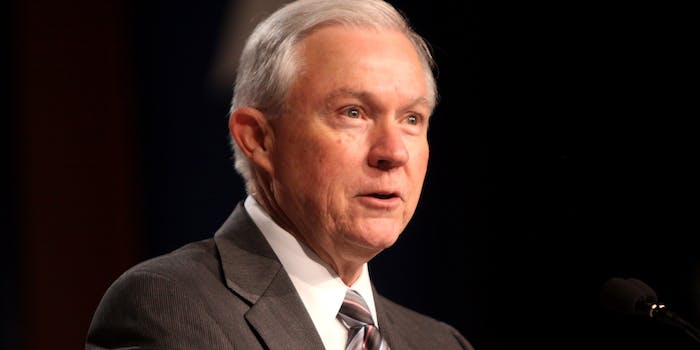 Most Americans believe Jeff Sessions lied under oath and should resign, poll finds

His Russian ties are a big concern.

More than half of the respondents in a new Quinnipiac University poll released today believe Attorney General Jeff Sessions lied under oath at his confirmation hearing—and 51 percent say Sessions should resign.

The Trump administration has repeatedly said Sessions and other cabinet members did not have communications with the Russians during the 2016 election, specifically ambassador Sergey Kislyak. Their claims were proven false amid reports that Sessions met with the ambassador during the campaign period at least twice. As of Wednesday, it appears Sessions omitted a third meeting with a Russian official: A cocktail meet-and-greet held near the White House.

Respondents also disapprove of the way President Donald Trump is handling U.S. policy toward Russia, and 66 percent of them support an “independent commission investigating potential links between some of Donald Trump’s campaign advisors and the Russian government.”

According to Tim Malloy, assistant director of the Quinnipiac University Poll, “the gavel comes down hard on Attorney General Jeff Sessions. He lied and he should quit because of it, say Americans, who are clearly very concerned about the Russian affair and all the administration personnel involved with it.”

When questioned on Trump’s relationship with Russia, 61 percent were “very concerned” or “somewhat concerned.” Alleged Russian interference in the 2016 election earned 62 percent of votes for “very important” or “somewhat important.”

More than half of the respondents believe Trump should not repeal the Affordable Care Act, with 49 percent saying only parts of the act should be changed. In regards to illegal immigration, 63 percent say immigrants should have a path to citizenship. Less than half of the respondents, 48 percent, say public schools should allow transgender students to use bathrooms consistent with their gender identity.

Quinnipiac University surveyed 1,323 voters across the U.S. from March 2-6. Responses were collected through land lines and cell phone calls.