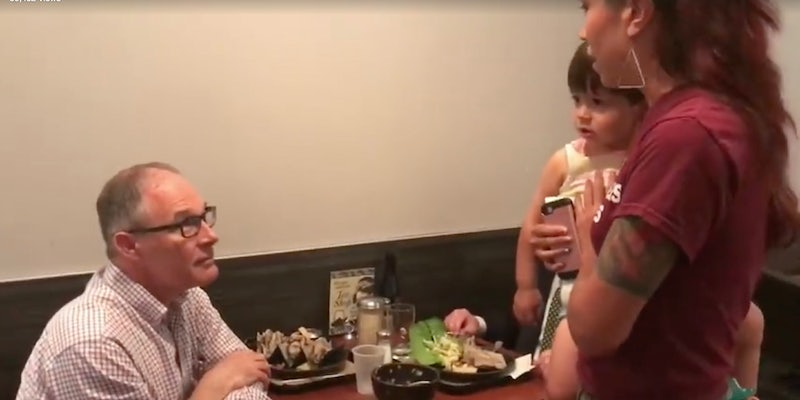 'Hi, I just wanted to urge you to resign.'

The mother of a toddler approached Scott Pruitt, director of the Environmental Protection Agency, while he was having lunch at a restaurant called Teaism in Washington, D.C. on Monday. The woman, Kristin Mink, wanted Pruitt to know exactly what she thinks of his policies.

Mink posted a video of the confrontation to Facebook, Splinter reports. The clip shows her walking up to a smiling Pruitt and an unidentified man as she holds her 2-year-old son and reads from notes.

EPA head Scott Pruitt was 3 tables away as I ate lunch with my child. I had to say something. This man is directly and significantly harming my child’s — and every child’s — health and future with decisions to roll back environmental regulations for the benefit of big corporations, while he uses taxpayer money to fund a lavish lifestyle. He’s corrupt, he’s a liar, he’s a climate change denier, and as a public servant, he should not be able to go out in public without hearing from the citizens he’s hurting. U.S. Environmental Protection Agency U.S. EPA Administrator Scott PruittETA: You don’t have to wait til your next Pruitt sighting to take action! Click here to help Boot Pruitt! https://www.addup.org/campaigns/boot-pruitt

“Hi, I just wanted to urge you to resign because of what you’re doing to the environment and our country,” Mink says as Pruitt’s face falls. “This is my son. He loves animals. He loves clean air. He loves clean water. Meanwhile, you’re slashing strong fuel standards for cars and trucks, for the benefit of big corporations.”

She went on to blast Pruitt for staying in a D.C. condo linked to an energy lobbying firm and “approving their dirty sands pipeline.”

“We deserve to have somebody at the EPA who actually does protect our environment, somebody who believes in climate change and takes it seriously, for the benefit of all of us, including our children,” Mink says.

In addition to grievances over his environmental policies, Pruitt has been criticized in the past month for asking aides to assist with personal tasks, including obtaining a mattress from Trump International Hotel and helping his wife score a Chik-fil-A franchise.

“It feels very personal,” Mink told Splinter in a text message. “That’s why I decided to introduce him to my son. Like, you are wrecking the earth THIS KID, every kid, will inherit.”