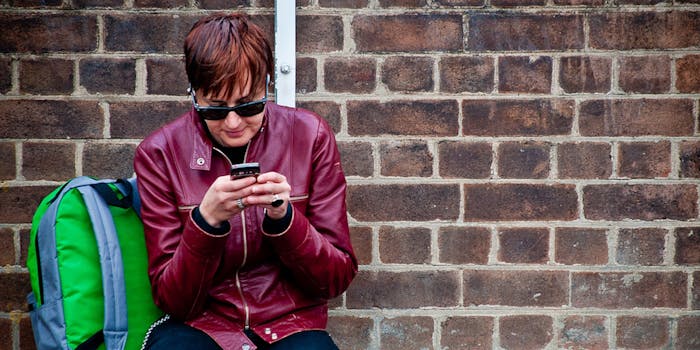 We’re still addicted to mobile apps, and these charts prove it

Reports about the decline of app downloads have led us to believe that the Age of Apps has seen its heyday. New statistics released by mobile marketing company Flurry indicate otherwise.

The statistics, published to the company’s blog last week, paint a picture of what Flurry call the app “install addict.” Simply put, they’re the people keeping the app business going. From 2011-2014, the number of apps downloaded per month by the average U.S. consumer has hovered just under 9, suggesting that app downloads have plateaued rather than declined. 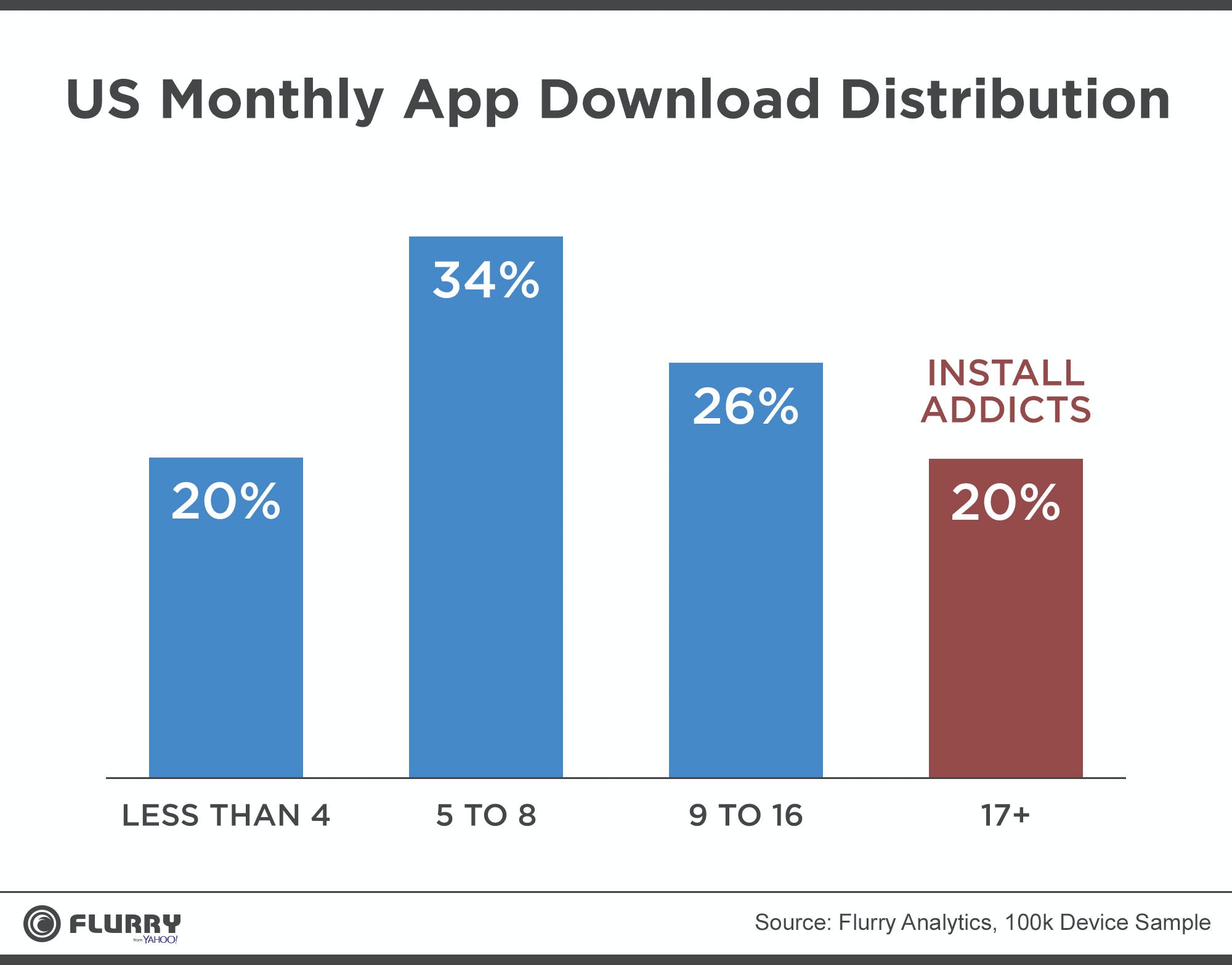 Upon deeper digging, Flurry found that install addicts made up a fifth of the consumers responsible for the steady download numbers. They defined an “install addict” as someone who downloaded more than 17 or more apps per month.

Flurry suggested that install addicts make up for the fact that 54 percent of people download fewer than the average 8.8 apps per month.

The statistics include downloads across all smartphones, tablets, and other devices owned by the 32 million consumers studied.

So, who exactly are these addicts?

Flurry found that they’re more likely to be females than males. Women were represented in the app-addicts group at a higher rate than in the overall sample. Addicts were 53 percent female and 47 percent male, while average consumers were 48 female and 52 percent male.

These people were mostly teenagers (13-17 years old), college-aged (18-25), or middle-aged people (35-54). Interestingly, adults aged 25-34 were underrepresented relative to the overall sample, suggesting a gap in app engagement in a presumably connected audience. As one might expect, seniors aged 55 and older were dramatically underrepresented relative to the overall sample. 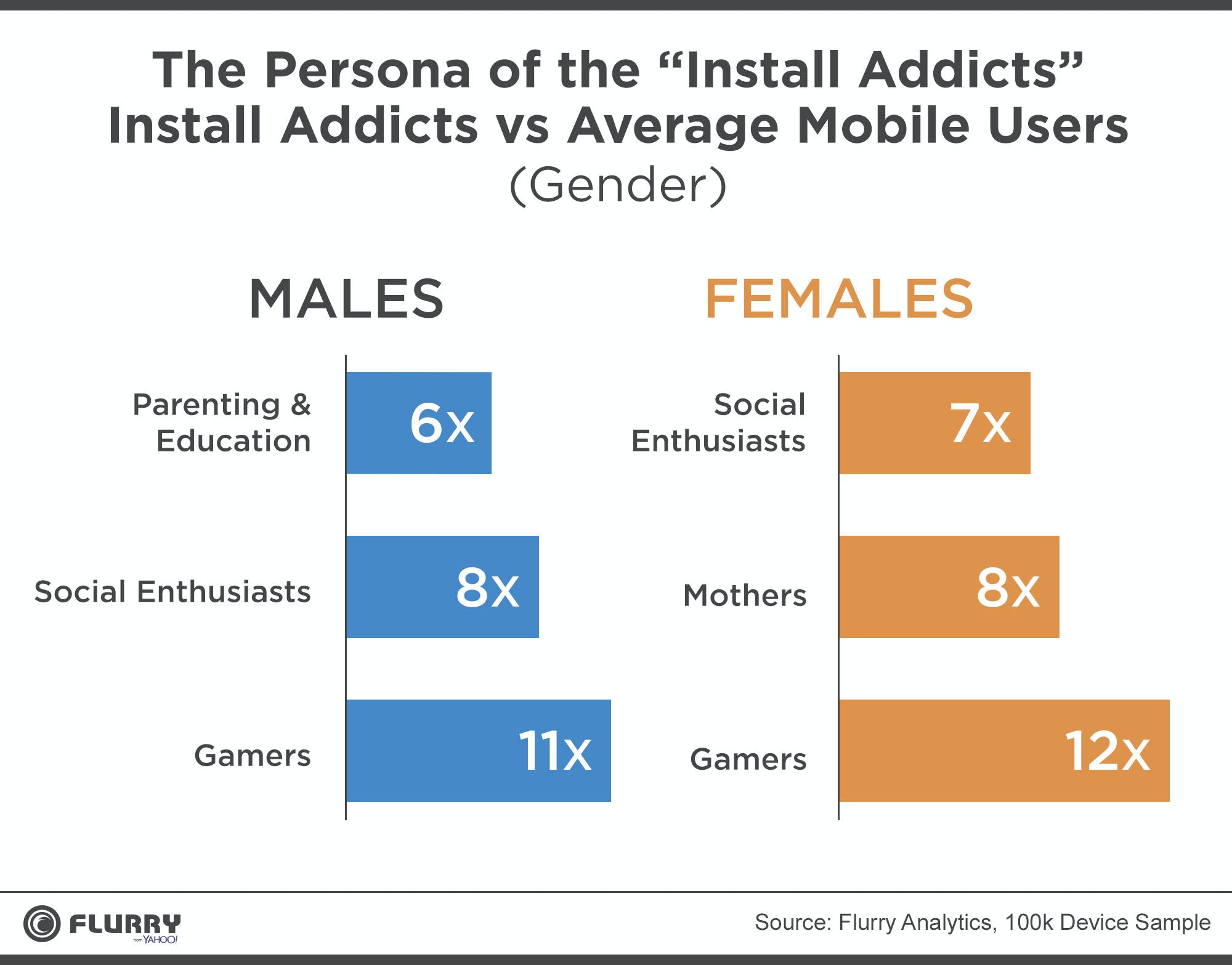 Gamers were most likely to fit the persona of male and female addicts, accounting for 11 and 12 times the number of downloads relative to the average consumer. Men were more likely to download social apps and parenting and education apps. Women were mothers and social enthusiasts. Flurry accounted for the high numbers of parenting-app addicts by suggesting that families often shared one device which children and teens could also access.

We may not all be middle-aged, game-loving mothers and fathers, but technology seems to be pushing us in the direction of an app-centric world. Apple’s iPhone 6 and 6 Plus accounted for 41 percent of phablet sales in the U.S., thereby driving even more app downloads. And while tablet sales didn’t grow as much as expected this year, they grew nonetheless.

Add to this the slew of wearables hitting the market covering everything from Google Glass to mood rings, all requiring the use of a companion app, and it’s clear that we’ll keep downloading apps for years to come.

Perhaps not 17 apps per month, though. That’s a bit much.