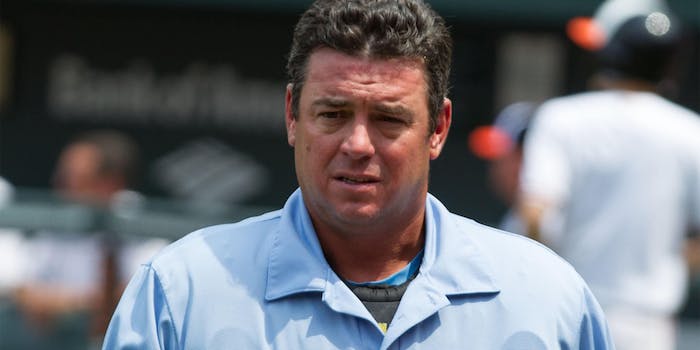 The umpire said he was buying an AR-15 and predicted a 'cival war' if Trump was impeached.

Major League Baseball (MLB) is reviewing a tweet posted by one of its umpires where he said he was buying an AR-15 said predicted that a civil war would break out if President Donald Trump is impeached, according to a new report.

ESPN reports that MLB Umpire Rob Drake wrote the tweet late on Tuesday. In it, he said: “I will be buying an AR-15 tomorrow, because if you impeach MY PRESIDENT this way, YOU WILL HAVE ANOTHER CIVAL WAR!!! #MAGA2020”

The tweet was quickly deleted, according to the news outlet.

Drake also reportedly tweeted: “You can’t do an impeachment inquiry from the basement of Capital Hill without even a vote! What is going on in this country?”

Major league umpire Rob Drake tweeted “I will be buying an AR-15 tomorrow, because if you impeach MY PRESIDENT this way, YOU WILL HAVE ANOTHER CIVAL WAR!!! #MAGA2020”, according to a copy of the tweet obtained by ESPN. MLB says it is aware of it. News: https://t.co/Qf7VMAXEoJ

MLB Commissioner Rob Manfred told ESPN the league was looking into the tweets.

On Wednesday the Major League Baseball Umpires Association said it was aware of Drake’s tweets and that he “chose the wrong way to convey his opinion about our great country.”

“His posting does not represent the view of the MLBUA or reflect those of the umpires we represent,” the association said in a Facebook post.

The tweets from Drake came the day before House Democrats held a hearing into Trump’s conduct in Congress’ Secure Compartmentalized Intelligence Facility (SCIF). Rep. Matt Gaetz (R-Fla.), a vocal Trump supporter, led a group of Republicans to disrupt the hearing on Wednesday afternoon.

Drake has been an umpire for 10 years, according to his official MLB profile.

In late September, Trump tweeted a quote from a pastor who predicted that if the president were impeached it would cause a “Civil War like fracture” in the United States.

You can read ESPN’s report about Drake’s tweets here.