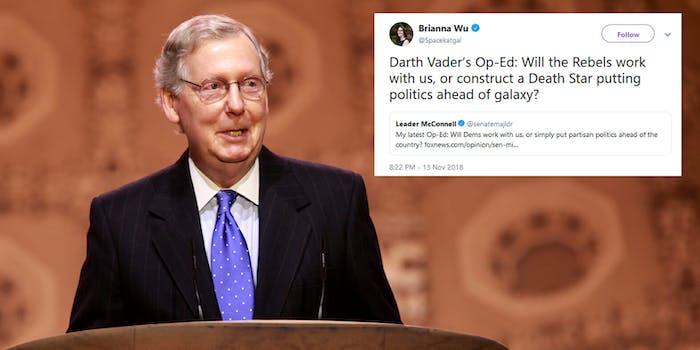 Mitch McConnell’s call for bipartisanship gets ratioed off the internet

Everyone quickly pointed out the irony.

Senate Majority Leader Mitch McConnell (R-Ky.) is calling for an end to partisanship in Congress and people on Twitter are very confused to hear that coming from him.

In an op-ed published by Fox News, the majority leader called for Democrats–who will soon control of the House of Representatives—to work with Republicans in the coming years, and not “put partisan politics ahead of the country.”

As many people online quickly pointed out, McConnell is known for his extreme partisanship—perhaps most infamously for leading the charge to not hold hearings on former President Barack Obama‘s Supreme Court pick Merrick Garland.

“Looking ahead to the coming year, there will be no shortage of opportunities to continue this impressive record of cooperation across the aisle and across the Capitol,” McConnell wrote in the op-ed. “What we can make of those opportunities will depend on our Democratic colleagues. Will they choose to go it alone and simply make political points? Or will they choose to work together and actually make a difference?”

The Kentucky senator tweeted out his op-ed on Tuesday and quickly met the wrath of people online.

My latest Op-Ed: Will Dems work with us, or simply put partisan politics ahead of the country? https://t.co/X4IwYUedTE

As of Wednesday morning, the tweet was thoroughly ratioed, with more than 40,000 people replying to the tweet compared to just 3,100 retweets and 8,100 likes.

The irony of McConnell calling for bipartisanship given his track record as Senate majority leader was not lost on people.

"The single most important thing we want to achieve is for President Obama to be a one-term president," said a statesman putting country ahead of partisan politics. https://t.co/rWsjh7HdJe

Who's the intended audience? Someone who's been in a coma since 2010? https://t.co/kEVKXbsW0z

"Our top political priority over the next two years should be to deny President Obama a second term." https://t.co/9mQ7hVYxx9

Darth Vader’s Op-Ed: Will the Rebels work with us, or construct a Death Star putting politics ahead of galaxy? https://t.co/nIIBHOwMOY

A ratio so perfect they're gonna find Leonardo da Vinci incorporated it into some of his paintings https://t.co/iLUSddxQG3

This is the most two-faced, slimy, hypocritical tweet it is possible to conceive. https://t.co/GcXVIFIByR

Imagine typing this, without laughing. https://t.co/i5bamdDqbu

You can read all of the Senate majority leader’s op-ed for Fox News here. Or not.