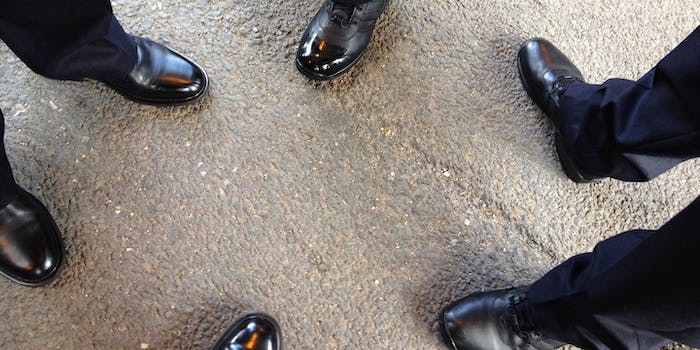 The officer has not been disciplined.

Fresh allegations of police brutality are surfacing in response to a YouTube video from Missouri that appears to show a drug enforcement officer kicking a restrained suspect in the face.

The footage, captured by a Missouri National Guard helicopter on Sept. 3, 2014, shows Timothy Whittle of Moniteau County, Mo., fleeing from multiple officers across an open field. Public records obtained by the Kansas City Star identify the arresting officers as members of the Mid-Missouri Drug Task Force.

At approximately 35 seconds into the video, Whittle, who is white, stops fleeing, turns toward the officers, and visibly raises his hands in the air in a surrendering gesture. After Whittle goes prone of his own volition, a plainclothes cop straddles him and begins the arrest. By all appearances, Whittle is no longer a threat, as both of his arms are restrained behind him.

It’s at this point, roughly 51 seconds into the video, that Whittle appears to receive a kick to the right side of his face from a second approaching officer, identified as Michael Chinn. Whittle’s head snaps sharply to the left and Chinn drops to the ground, pinning down Whittle’s head with his knee.

Neither officer draws his firearm while apprehending Whittle, but at one point, Chinn appears to hold a police-issue X26 Taser against either one side of Whittle’s face or the back of his head. In a police report, Chinn admits to using the stun gun on Whittle’s back, an act also caught on camera.

As the National Guard helicopter moves approximately 180 degrees, Whittle’s face temporarily comes into view. Blood can be seen smeared across his forehead and dripping from his right brow. Both arresting officers noted the cuts to Whittle’s in their reports; neither officer mentioned Chinn’s apparent kick.

No blood can be seen on Whittle’s face—at least, in the footage—before the arrest begins.

According to police, drug enforcement agents intended to serve a search warrant at Whittle’s home, where it was believed he stored materials for the production of methamphetamine. Deputies observed Whittle and another man depart the residence in an SUV. The Missouri National Guard followed the vehicle to a second residence, where Whittle reportedly fled in a black pickup truck upon spotting the drug-task-force members.

The Kansas City Star reported that Whittle pleaded guilty in October to resisting arrest and tampering with a motor vehicle. He is currently serving a four-year prison sentence. The Star also noted that, in the video, Whittle does not appear to resist the officers until after he is apparently kicked in the face. The officers’ official statement does not report this fact.

According to the Morgan County Sheriff’s Department, Officer Chinn has since left the six-county Missouri Drug Task Force for another law enforcement job.

Photo via Jeppestown/Flickr (CC BY SA 2.0)