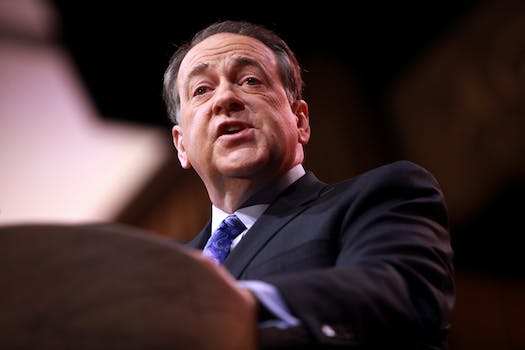 It was meant as a joke. But it was also completely serious.

Huckabee kicked off his run with a speech in Hope, Ark., the hometown he shares with another previous resident of the state’s governor’s mansion, former President Bill Clinton. During the speech, Huckabee positioned himself as a populist alternative to other candidates, from Democrat Hillary Clinton to fellow Republicans like former Florida Gov. Jeb Bush and Sen. Ted Cruz (R-Texas), whose campaigns are fueled by deep-pocketed donors.

“I will be funded and fueled not by the billionaires, but by working people who will find out that $15 and $25 a month contributions can take us from Hope to higher ground,” Huckabee said.

“Now, rest assured, if you want to give a million dollars, please do it,” he added with a laugh.

To Huckabee, who is legitimately a pretty funny dude (for a politician), this aside was largely a joke. At the same time, it also encourages a violation of campaign finance law, which, in its current form, is also a joke.

If Huckabee were asking for contributions to his campaign over and above the individual donation limit, that would be encouraging donors to break the law. But that’s not exactly what Huckabee was talking about when he referred to “billionaires.”

In 2012, casino magnate Sheldon Adelson spent over $100 million to elect Republican candidates. Some $30 million went to former Massachusetts governor Mitt Romney‘s failed effort to unseat President Barack Obama. Adelson didn’t give that money to Romney directly, you see. Instead, the money was funneled through Restore Our Future, a super PAC run by a collection of former top Romney aides and spent on an election effort that is, by law, required to be completely separate from the politicians’ official campaigns.

Thanks to the Supreme Court’s decision in the 2010 case of Citizens United v. Federal Election Commission, it’s fine and dandy to dump limitless amounts of money into a campaign as long as that money is spent by an independent super PAC group rather than the campaign itself.

The super PAC established to bolster Huckabee’s 2016 presidential run is called Pursuing America’s Greatness. Candidates are prohibited from directly coordinating with their associated super PACs, but they are allowed to solicit donations to a super PAC in amounts up to $5,000.

When Clinton’s campaign raises a predicted $1 billion over the course of the next year and a half in her quest for the Oval Office, a majority of that is likely to come from left-leaning super PACs, like Priorities USA Action.

“It’s what everyone knows—that giving money to the super PAC is the same as giving the money to him,” the Campaign Legal Center’s Larry Noble told the Washington Post, in regards to Huckabee. “The legal fiction is saying, oh, you’re not giving me the money. But in this unguarded moment, he actually spoke what the truth is.”

Even so, while Huckabee’s line seemed like an invitation for his backers to get themselves in trouble by breaking campaign finance rules, it’s extremely unlikely Huckabee himself will experience any repercussions. Not only did Federal Election Commission Chairwoman Ann Ravel recently tell the New York Times that the agency tasked with policing campaign finance violations was so mired in partisan gridlock that “[t]he likelihood of the laws being enforced is slim,” but an FEC spokesperson told the Daily Dot that this type of exhortation to donate falls beyond the scope of the commission’s jurisdiction. In other words, the FEC only takes enforcement actions based on actual donations, not speeches about donations.

“Take the fact that the FEC seems to be in the deep freeze and add the fact that Huckabee seemed to be joking. Now throw in the fuzziness of the comment—it wasn’t entirely clear whether he was referring to his campaign account or the super PAC,” said Viveca Novak of the Center for Responsive Politics. “I would be very surprised if the FEC took any action on this.”

However, Hucabkee’s off-the-cuff remark falls into an interesting wrinkle of campaign law. In order for Huckabee to succeed as a candidate, he’s going to need backers willing to sink very large amounts of money into his campaign.

The New York Times notes that money proved a major roadblock for Huckabee in his unsuccessful run for the GOP nomination in 2008. While Huckabee’s stance as the race’s de facto social conservative earned him an unexpected victory in the Iowa Republican Caucuses, along with wins in six subsequent state primary elections, his efforts struggled financially. The Huckabee campaign only raised about $16 million, and the candidate was forced to have some of his advisors work without pay, before he eventually conceded the race to endorse Sen. John McCain (R-Ariz.).

In 2014, about 32,00 megadonors, the “one percent of the one percent,” contributed 29 percent of the total donations to congressional candidates. It’s a number that’s only expected to go up until, as Mother Jones writer Kevin Drum put it earlier this year, “eventually, two billionaires will duke it out for president every four years.”

The candidate may have been joking about looking for someone to spend a million dollars getting him elected president, but he was also completely serious.