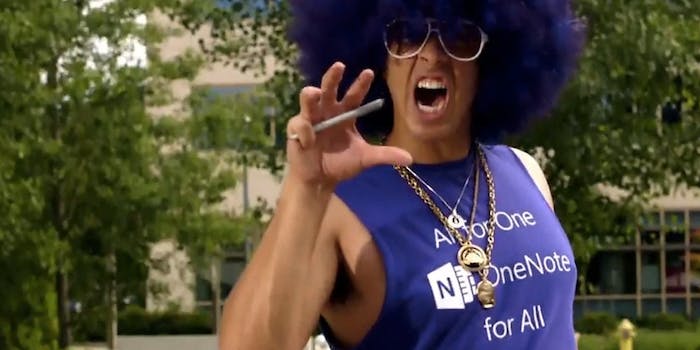 Microsoft ridiculed for cringeworthy ‘Sexy and I Know It’ parody

This is the definition of "trying too hard."

We now have undeniable proof that there is nobody in Microsoft’s marketing department that knows how to say “That’s probably not a good idea.” In what can only be described as a shortsighted attempt at making its rather bland OneNote app seem somehow worthy of pop culture relevance, Microsoft has released a parody music video that will make you cringe so hard your face may actually implode.

The video, titled Click it and I Note it—a play on Sexy and I Know It—is like a collection of the most awkward clips Microsoft managed to record while making its employees dance around with a variety of props and gadgets, including the company’s new Surface Pro 3. It’s horrible from start to finish.

Being playfully amateurish is a proven marketing strategy, but there’s a difference between being intentionally out of touch for comedic purposes, and looking like you’re trying way too hard. This video falls squarely in the latter category, and just about every person in it looks like they’d rather be anywhere else.

When the official MSOneNote Twitter account tweeted the video out, it was met with so many blank stares that Microsoft made the video private for a brief while, and deleted the original tweet. Of course, that wasn’t before a few other YouTube accounts reposted it, allowing it to live on in infamy until the end of time. The video was eventually tweeted out a second time once the video was made public again, making the entire situation even more strange.

For anyone keeping score, this isn’t the first time Microsoft has publicly displayed how horribly out of touch it is when it comes to in-house videos; Just last year, a video titled A Fly On The Wall In Cupertino attempted to poke fun at Apple’s iPhone, along with CEO Tim Cook (or is that Steve Jobs?) and design guru Jony Ive. Microsoft was hit with such a backlash that it was forced to make a public statement acknowledging that the ad was in bad taste.