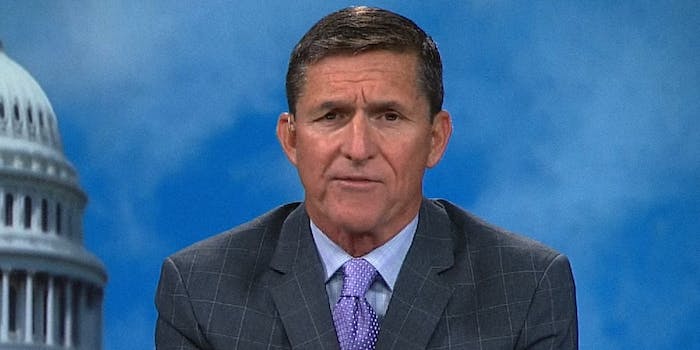 In the past, President Trump has questioned the innocence of people invoking the Fifth Amendment.

The Senate Intelligence Committee subpoenaed documents from Flynn relating to Russian interference in the election earlier this month. ABC News reports that Flynn will invoke the Fifth Amendment, which protects individuals from self-incrimination.

“He will not be producing the documents they sought. He is entitled to decline pursuant to the Fifth Amendment,” a source told ABC News.

The deadline set by the Senate committee for Flynn to produce the documents was Wednesday.

President Donald Trump, who in the past has questioned the innocence of people taking the Fifth, fired Flynn days after former acting Attorney General Sally Yates warned White House officials that Flynn was vulnerable to blackmail by Russia.

Flynn’s firing was the subject of a controversy that paralyzed the Trump administration last week. The New York Times revealed that former FBI Director James Comey wrote a memo where he details an exchange where Trump asked him to end the agency’s investigation into Flynn.

Trump fired Comey on May 9 at least in part due to the ongoing Russia investigation.

During the presidential campaign, Trump criticized Democratic challenger Hillary Clinton’s aides for invoking the Fifth Amendment during an investigation into her use of a private email system during her time as secretary of state in the Obama administration.

In September, Trump seemed to imply that only guilty people would use the Fifth Amendment.

“If you’re innocent, why are you taking the Fifth Amendment?” Trump said at a September rally.

TRUMP in September 2016: "The mob takes the Fifth. If you’re innocent, why are you taking the Fifth Amendment?" pic.twitter.com/jpuNAJ1Q4L

Earlier this year, Flynn agreed to testify in the investigation of Russia’s involvement in the election in exchange for immunity—a request that was denied by the Senate and House committees conducting the separate investigations.

Reuters reported last week that Flynn and other Trump campaign members were in contact with Kremlin officials on nearly 20 occasions during the end of the 2016 presidential race—including calls with Russian Ambassador Sergey Kislyak.