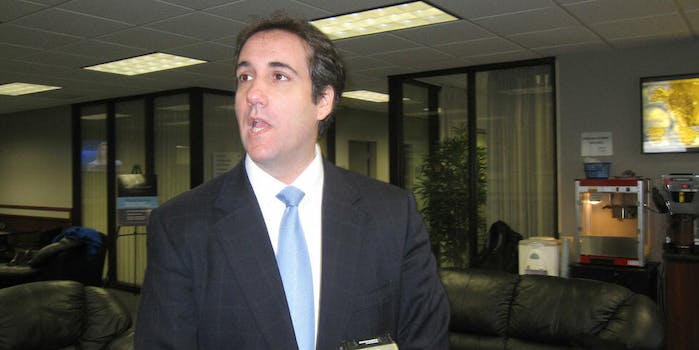 The sites were created days after Hillary Clinton denounced extremists.

The firm, Columbus Nova, registered several domains during the 2016 election named after far-right radical groups. These include Alt-right.co, Alternate-right.com, Alternate-rt.com, Alt-right.com, and other combinations, which were all established two days after Hillary Clinton denounced extremists, racism, anti-Semitism, and sexist viewpoints in an August 2016 speech.

The spotlight was thrust on Cohen after the attorney for adult actress Stormy Daniels, Michael Avenatti, alleged the lawyer had received $500,000 from Columbus Nova, whose biggest client is the Russian oligarch Viktor Vekselberg. A lawyer at Columbus Nova told the New York Times on Tuesday that the money was a “consulting fee” and didn’t have anything to do with Vekselberg, who is also the cousin of its CEO Andrew Intrater.

Special counsel Robert Mueller’s team reportedly interviewed both Intrater and Vekselberg about payments to Cohen and alleged donations given to the Trump campaign.

It’s not clear whether the “alt-right” sites ever hosted content, but they are all currently inactive. A spokesperson for the company told the Post that they were unaware of the sites before Wednesday, and that design manager Frederick Intrater, the brother of Andrew, was not acting on the firm’s behalf when he registered them. However, Intrater used his company email address and listed the organization.

Avenatti claims the money Columbus Nova sent to Cohen may have been used as reimbursement for the $130,000 hush money he sent to Daniels to keep quiet about her alleged affair with Trump. The president admitted earlier this month to reimbursing his lawyer for the payment he sent to the adult film star as part of a settlement.

Columbus Nova has been under attack since it was revealed to have kept Cohen as a consultant. Cohen, whose home office was raided in April, and his businesses are now under federal investigation for possible bank fraud, wire fraud, and campaign finance violations, the Post reports.

The payment from Columbus Nova to Cohen’s shell company, Essential Components, is just the tip of the iceberg in a scandal that has dominated headlines. On Tuesday, it was reported by the New York Times that $4.4 million flowed through Cohen’s company shortly before Trump was elected president up until January. Telecom giant AT&T was among those who contributed, admitting on Wednesday that it spent $200,000 for “insights into the new administration” as part of a controversial pay-to-play scheme.

Update 4:35pm CT, May 10: Frederick Intrater sent a statement to the Daily Dot via his representative claiming he made the purchases to flip the domains—or buy them as they started to trend and then sell them for a profit at their peak popularity.

Intrater said he used his own money to buy and sell more than 100 domain names over the years. He also claims he didn’t sell those associated with the “alt-right” because they are “inconsistent” with his moral beliefs.

He admitted to using his personal work email address but said he never told his brother or any other Columbus Nova employee.

His full statement is below:

“I feel compelled to make a public statement in the wake of lots of publicity which is trying to connect Columbus Nova with supporting white supremacist or anti-Semitic ideology. This couldn’t be further from the truth.

For many years and with my own money, I have purchased internet domain names relating to various then-topical subject matter with the aim of eventually selling them for profit. Among the more than 100 domain names I have ultimately purchased, there were some names with “alt right” connotations bought at a time when there was mainly an ultra-conservative perception of “alt right“. The only connection to Columbus Nova is that I work there and unfortunately sometimes used my work email address for my personal use and, in this case, to register my ownership of the domain names.

I subsequently thought better of the idea of selling domain names which obviously now have connotations that are inconsistent with my moral beliefs.

So instead of selling them, I left them dormant to let them expire. In retrospect, it was a dumb idea and I never told my brother or anyone else at Columbus Nova that I had done this.

To conclude that I support white supremacy or anti-Semitism is unreasonable given what I’ve described above and also taking into consideration that I am a Jew and the son of a Holocaust survivor.

I truly regret the unexpected outcome of my actions.”