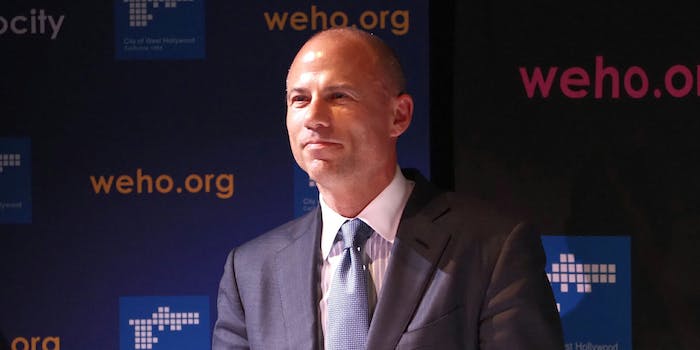 Michael Avenatti was indicted on Wednesday for allegedly taking $300,000 from his former client Stormy Daniels.

Federal prosecutors in the Southern District of New York announced on Wednesday Avenatti had been charged with aggravated identity theft and fraud. Authorities accused Avenatti of using “misrepresentations and a fraudulent document” to steal a “significant portion” of a book advance from Daniels, who is identified as “Victim-1” in court papers.

Authorities allege Avenatti sent a fraudulent letter to Daniels’ literary agent that asked the agent to send money into a bank account controlled by him. Daniels did not know of the existence of the letter, according to authorities.

The money sent to the account was then used by the embattled lawyer to pay a monthly lease on a car, pay for airfare, dry cleaning, hotels, restaurants, meals, and insurance, authorities said. He also used the money to pay employees of his law firm and a coffee business he owns, according to court papers.

“Michael Avenatti abused and violated the core duty of an attorney–the duty to his client,” Manhattan U.S. Attorney Geoffrey S. Berman said in a statement. “As alleged, he used his position of trust to steal an advance on the client’s book deal. As alleged, he blatantly lied to and stole from his client to maintain his extravagant lifestyle, including to pay for, among other things, a monthly car payment on a Ferrari. Far from zealously representing his client, Avenatti, as alleged, instead engaged in outright deception and theft, victimizing rather than advocating for his client.”

Avenatti defended himself in a number of tweets on Wednesday.

“No monies relating to Ms. Daniels were ever misappropriated or mishandled. She received millions of dollars worth of legal services and we spent huge sums in expenses. She directly paid only $100.00 for all that she received. I look forward to a jury hearing the evidence,” he wrote in a series of tweets. “I look forward to a jury hearing all of the evidence and passing judgement on my conduct. At no time was any money misappropriated or mishandled. I will be fully exonerated once the relevant emails, contracts, text messages, and documents are presented. I was entitled to any monies retained per my agreement with the client. My agreement for representation and compensation included a percentage of any book proceeds.”

Authorities alleged that Avenatti has not paid Daniels back half of the $300,000.

This is Avenatti’s second run-in with the law in recent weeks.

In a separate indictment, Avenatti was charged with trying to to extort Nike out of millions of dollars. Authorities said Avenatti threatened to hold a press conference ahead of the company’s quarterly earnings call to address “allegations of misconduct by Nike employees” if it did not pay his client $1.5 million and “retain” Avenatti and another unnamed co-conspirator to conduct an “internal investigation” and pay them between $15 million and $25 million.