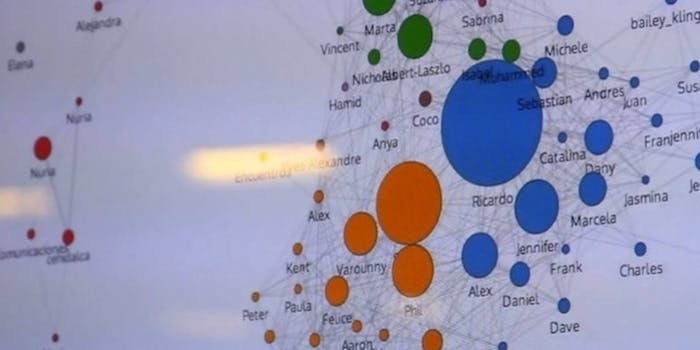 Snoop on your own metadata with MIT’s help

The Immersion project aims to "allow you to see the web you have weaved together with others."

Metadata. A month ago, the average person wouldn’t have given a microsecond’s thought to the word. Hell, most Americans probably didn’t even know the word existed, let alone the data. But, in the wake of Edward Snowden’s NSA leak, everyone has an opinion on metadata’s privacy implications, as well as exactly who has access to these rich, global etheral mines of time, data and location information.

For the U.S. government and President Obama, in particular, it has become political dynamite. On July 4, for instance, a group called Restore the Fourth is planning nationwide rallies, while European allies are collectively arguing that the snooping will strain upcoming U.S.-E.U. trade talks. “Your data is gold,” Thomas Drake said at a MoMA event on Sunday.

Now, a trio of geeks at the MIT Media Lab are attempting to give users a chance to actually embrace the big metadata gold rush and learn from themselves. In the process, César Hidalgo, Deepak Jagdish, and Daniel Smilkov hope to depolitize data mining and better demonstrate its value— and costs—to the end user.

Hidalgo, a profesor at the MIT Media Lab, where he is head of the Macro Connections group, is primarily interested in human understanding of and “developing concepts of complexity, evolution and network science.” Jagdish is the large-scale data guy, while Smilkov previously worked in the field of network science. The three bill Immersion as “an invitation to dive into the history of your email life in a platform that offers you the safety of knowing that you can always delete your data.”

The group sees the project in almost artistic terms. They see the new Internet user experience as a blank “canvas” that acquires data over time. Comparing Immersion to a “cubist painting,” they consider the site a form of “artistic representation that exists only in the presence of the visitor.” When this data is arranged visually, like the tentacles of an octopus, it’s easy to see why. The idea, to quote from an Immersion video, is to “allow you to see the web you have weaved together with others.”

Jagdish notes that Immersion orginally came into being as an interactive installation at the Media Lab. It featured a guestbook graph and a ranking field that is currently unavailable on the website. When visitors logged into the installation’s guestbook, they appeared as a node onscreen. The ranking view, on the other hand, visualized the users’ most frequent collaborators (those people to whom users sent three or more messages.)