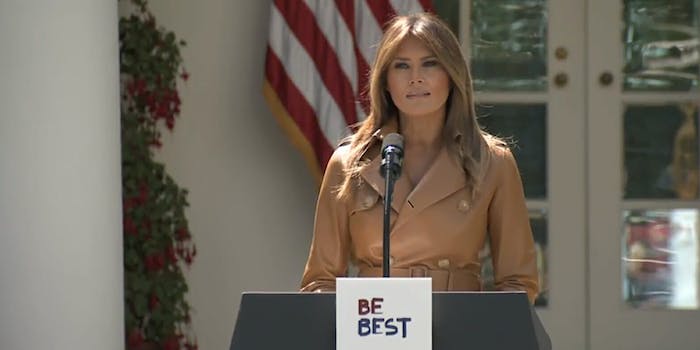 The irony of her campaign including cyberbullying wasn't lost on people.

First Lady Melania Trump announced on Monday her new initiative aimed at helping American children, with a special focus on social media. It did not have a great roll out.

As the First Lady spoke on Monday afternoon, the website for her “Be Best” campaign did not work on the White House’s website, and the social media aspects of the initiative were mocked online considering that her husband, President Donald Trump‘s, uses Twitter to belittle people.

During her speech, where the First Lady spoke in front of a large podium with “BeBest.gov” listed on it, the BeBest.gov website led to a “404” error page.

Besides the technical difficulties, the focus on social media use among children—including how to use it to combat cyberbullying—was mocked online since the president has used social media to belittle political opponents, those he disagrees with, and even leaders of foreign countries.

The irony of the First Lady talking about “positive online behaviors” just a few feet away from Trump was not lost on people online.

And this isn’t the first time the First Lady’s focus on cyberbullying has been called out.

People constantly suggest Melania Trump's campaign against social media bullying is some kind of delusional exercise un-self-awareness. I think she is perfectly aware.

Your husband is a social media bully. May want to sit him down in his kindergarten desk and practice your "bullying" speech on him and his children. Remember, examples start at home. But, I don't blame you for not ever being home

“As we all know, social media can both positively and negatively affect our children. But too often, it is used in negative ways.” –@flotus, maybe or maybe not throwing shade at @realDonaldTrump

The disconnect between a “positive” social media campaign and the president’s use of Twitter in particular was also brought up by reporters on Monday afternoon.

When asked about “cyberbullying” and the president, White House Press Secretary Sarah Huckabee Sanders said it was “ridiculous” to label Trump’s use of social media as something that is being targeted by the First Lady’s campaign.

“I think that the idea that you’re trying to blame cyberbullying on the president is kind of ridiculous,” she said. “When it comes to kids, its something that has been problematic, and something that we have seen over the last decade. The First Lady sees it to be an important issue and something she want’s to address.”