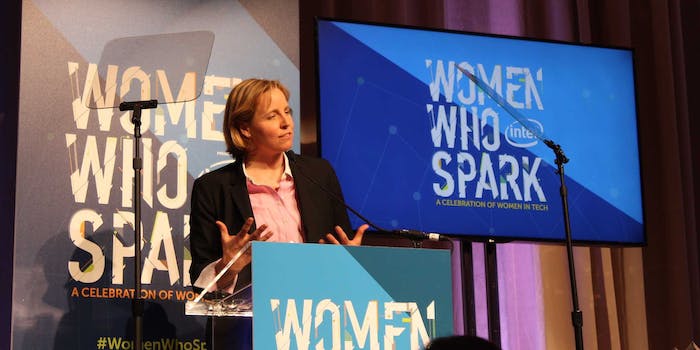 I’ve heard Megan Smith, CTO of the U.S. speak a handful of times before. Each time she gets up on stage to resounding applause, she talks about women in technology. Grace Hopper is clearly a favorite, as Smith mentions the origin of “debug” quite regularly, but she also discusses the the women of Bletchley Park, Ada Lovelace, and the “pipeline” of talent that’s supposedly not filled with enough minority students to improve diversity in the workforce.

Last week at CES in Las Vegas, I got a chance to sit down with Smith at a roundtable for reporters—though I was the only one physically there—to hear her thoughts about diversity in technology and the Women Who Spark awards presented by Intel.

I admire Smith, and I was looking forward to asking her questions surrounding the growing efforts to improve diversity and inclusion in technology. Unfortunately, she regurgitated the same talking points we’ve heard so often from the tech companies.

It’s understandable that, as a politician, she carefully constructs a narrative surrounding the issue, and as the first woman CTO of the U.S., she’s among the most high-profile people to address this issue. She has the eyes and ears of America, and considering the tech industry has over 500,000 open jobs, people listen to what she has to say. Her words impact more than just people in Silicon Valley where conversations around diversity are finally influencing company policies. (The White House’s TechHire initiative is just one of the ways she’s involved with promoting tech education and advancement, and Smith mentioned it a few times during the roundtable.)

However, Smith provided lip-service that didn’t adequately address systemic and fundamental problems in a critical and thoughtful way. It’s the same rhetoric we hear from CEOs, hiring managers, and people who are trying, softly and without stepping on toes, to get a point across. She preached the gospel of learn-to-code programs without strongly acknowledging hiring bias that favors graduates from Stanford and MIT, and talked about the “pipeline,” while glazing over data that shows that the pipeline actually produces more minority computer science graduates than companies hire.

I asked Smith if she’s familiar with the phrase “colorless diversity,” the idea smartly explained by Slack engineer Erica Baker. When undertaking diversity and inclusion initiatives, companies often focus on women, and such “women in tech” programs disproportionately benefit white women. I also asked Smith to explain how companies that hire from feeder schools can end this educational bias, because even though people in tech encourage others to pursue careers at universities or through coding bootcamps, it’s sometimes hard to get hired without a degree from top tech schools.

It’s a really important thing to be doing.

One of the challenges around diversity is to be really broad. And think about all the different people you are trying to reach. There is an issue where some of the tech companies will think about diversity and they will go straight to women and they’re not thinking about people of color, or disability, or a whole range of things. So it’s important to be mindful.

The companies who are having the most success, it’s exciting that Intel is here today because they are really pushing themselves in a great way. They actually put $300 million up where $150 million is focused on culture and half is focused on pipeline…It’s very interesting work.

One of the things to do is not only in the hiring, but what are you doing around in your culture? What is one doing around advancement? We did a brainstorming session … in Silicon Valley in June and we brainstormed with the teams about four areas.

One is around advancement. Even if you have women and people of color, these groups, are they getting to the position you need them to be or are they leaving you overtime because there are culture issues and discrimination issues? Even if they live in a world of unconscious bias, in a lot of cases at this point it’s a serious issue. Sometimes you call it death by a thousand paper cuts and you see each individual story can be explained possibly, but when you look at it in aggregate, it’s serious and we need to debug it. That’s what tech does, we debug things. In Grace Hopper’s words.

Of course pipeline hiring and getting better … Not because they change the habit, but the networks are tight so people are just going back to their same people. Exactly to your point about the schools, being much broader about how you’re reaching out, to the historically black universities are graduating amazing people, going and getting that talent. Getting talent from some of the greatest places I remember when I was in Silicon Valley—University of Austin, University of Puerto Rico, University of Maryland…Harvey Mudd has done great work in their curriculum, so now they’re 50/50 on women in computer science. So go to those schools.

A friend of mine says [when someone asks] how can I hire more women and minorities, she’s like: Hire them. Go find them, go where they are.

You just have to do that extra work to go get them and come out of the bias of, you know, we didn’t create the problem that we live in, but as we become conscious of it more and more, we have to act on it.

Essentially, Smith is saying companies must just try harder. It’s true, but it seems like Smith is acknowledging a problem exists without providing data-based solutions for how to solve it.

The “pipeline problem,” is one narrative perpetuated throughout tech that’s meant to justify the dearth of diversity within companies. But according to a USA Today analysis, Black and Hispanic students of computer science and engineering are graduating at twice the rate companies are hiring them.

And when women and people of color are hired, they’re much more likely to leave the workforce than white male peers. One study found that out of 60 women of color who work in STEM-related research fields, 100 percent of them have faced one or more patterns of gender bias. Forty-one percent of women leave careers in tech after just 10 years, compared to just 17 percent of men.

I asked Smith what she thought of the data regarding the graduation rates that don’t necessarily match the definition of the pipeline problem, and how companies can instead focus on retaining talent that already exists in their workforce.

This idea of advancement, like Intel and others who are doing the work on their culture, unconscious bias within, and people not getting the promotions they deserve. I was talking to a CEO recently, and they had done an analysis on their pay and they noticed maybe women were being paid more than men, and they noticed they were being under-promoted. What was actually happening was they were hitting the top level of the position they were in in the company, but they should’ve been in the next level or two above, and they would’ve been at the bottom of that.

Really getting into the data and having the tough conversations that need to happen to shift this.

It is amazing to me coming from the president’s team which is so diverse, and walk into CES and just being hit by the deep imbalance of our industry and how unnecessary it is, and what an opportunity it is for the country and these companies. All of the data shows that diverse teams make better products. It’s proven…

One of the key things the leadership need to do and we’re starting seeing it with more of these companies is put it in their top five priorities, not in their top 20. Of course everyone has this in their priorities, they’d be silly not to. And people care. But they need to manage to it, and raise the priority of it to the executive level.

However, even when executives claim to have diversity as a priority, it’s not always reflected in the work done within the company. One recent study of over 700 U.S. companies shows that “implementing diversity training programs has little positive effect and may even decrease representation of black women.”

As Leslie Miley, the only Black engineer in a leadership position at Twitter who left the company in 2015, explained, even though company executives said diversity was important, they demonstrated a fundamental misunderstanding of how to improve it.

Miley noted that Twitter’s senior vice president of engineering Alex Roetter said: “We are committed to diversity, but we are not going to lower the bar.”

I asked Smith about her thoughts on how people use “lowering the bar” as an excuse to account for a lack of diversity. She referred me to a TED talk.

Perhaps a gigantic conference and award show isn’t the best place for a politician to thoughtfully address tech’s failings in diversity. Or maybe expecting a high-profile individual to say something unique each time she’s asked about it (which is often, of course) is expecting too much.

Perhaps the voices we should be listening to aren’t amplified as loudly or as often. Voices like Leslie Miley, Erica Baker, Justin Edmund, Danilo Campos, Joelle Emerson, Nicole Sanchez, and Angelica Coleman.